Who Was Mona Lisa?

Cari amici, I have created a new blog, Discovering Mona Lisa, for my new book–MONA LISA: A Life Discovered, which will be published on August 5 by Simon and Schuster. In order to receive posts, you have to sign up–but it's as easy as clicking the subscribe button on the site. Please join me on what has been a delightful journey of discovery! 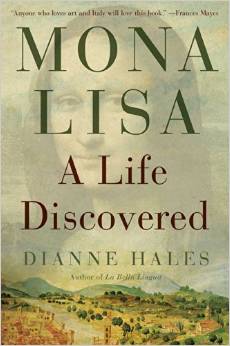 No street bears her name. No plaques mark where she lived. Although her mysterious smile has enchanted millions, Lisa Gherardini, born on June 15, 1479, is almost invisible in her hometown. Who was the real woman everyone recognizes yet no one knows?

Mona (Madame) Lisa Gherardini descended from an ancient clan of Tuscan knights who lorded over a wide swath of Chianti before taking up residence (and arms) within the walls of Florence. The family — among the wealthiest and most bellicose feudal warlords — referred to their fierce temperament as Gherardiname or "Gherardini-ness."

By the time of Lisa’s birth, the Gherardini glory had faded. Her first home was a converted wool shop on a squalid street in a working class neighborhood. Lisa’s family eventually moved to rented rooms off Via Ghibellina, where her grandparents lived just steps away from Ser Piero da Vinci, father of the renowned artist.

At age fifteen, Lisa was married to a widowed silk merchant almost twice her age. Ambitious and avaricious, Francesco del Giocondo (1465-1538) blustered through Florence, pouncing on profits wherever he could find them. Only one person softened his choleric temper: the woman who became stepmother to his young son and went on to give birth to six children.

Mona Lisa’s life spanned the most tumultuous chapters in the history of Florence, decades of war, rebellion, invasion, siege—and of the greatest artistic outpouring the world has ever seen. Amid a galaxy of artistic stars, none outshone Leonardo da Vinci (1452-1519), who began Lisa’s portrait around 1503.

Why did the universal genius of the Renaissance turn down more prestigious commissions and choose a 24-year-old Fiorentina as his model? After delving deep into Lisa’s history, I am convinced that the master of sapere vedere (knowing how to see) glimpsed something special in her, perhaps her indomitable Gherardini spirit shining bright.

Leonardo kept Lisa’s portrait with him for the rest of his life, infusing it with all that he had learned about painting — and about being human. After a court summoned Leonardo to Milan in 1506 to complete a long-disputed commission, Lisa’s family was caught in a whirl of personal crises and political upheavals.

Her sixth child, a boy named Giocondo, survived for only a month. Her younger sister, forced into a nunnery for lack of a dowry, was accused of committing “obscenities” with local youths during a late-night rendezvous. Her daughter Camilla, who entered a convent at age twelve, died before her twentieth birthday. Lisa’s truculent husband twice faced charges of usury, was briefly jailed as a Medici sympathizer but ultimately rose to high political posts after the once-mighty dynasty reclaimed power.

Before his death at age 73, Francesco arranged for his “noble-spirited” wife to live with their son Piero. Instead, Lisa took up residence in Sant’Orsola, the convent where her youngest daughter Marietta had taken vows.

Defying her husband’s instructions, Lisa chose, upon her death at age 63 in 1542, to rest for eternity among nuns rather than in the family crypt. A team of cacciatori di ossa (bone hunters) are attempting to identify her remains among several skeletons recently excavated from the convent ruins.

The French King Francis I, Leonardo’s final patron, enshrined Lisa’s portrait in the lavish royal bathing suite at Fontainebleau Palace. Louis XIV moved “her” to Versailles. Napoleon, besotted by “Madame Lisa,” kept her in his bedroom at the Tuilleries.

After two centuries of display at the Louvre, the Mona Lisa continues to inspire poems, plays, songs and endless copies and caricatures. Why?

Leonardo’s masterpiece did more than revolutionize art with breakthroughs in perspective, proportion and optics. Through his distinctive sfumature (subtle shadings created by feather-light brush strokes), Leonardo breathed life into his portrait of Lisa Gherardini.

In her eyes and especially in her smile, we see and sense the soul of a real woman. And the more we learn about her—as a proud Florentine, daughter, wife, mother and muse—the more fascinating she becomes.