Once in a Red Moon in the Italian Language 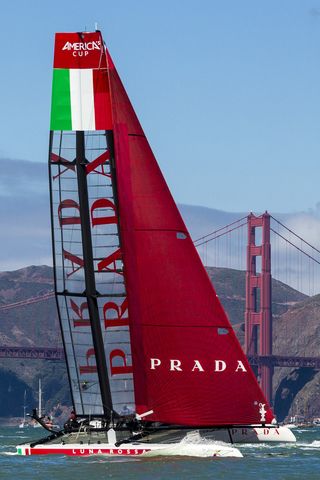 Every culture, from ancient Babylon to Egypt to Greece, has been captivated by il potere della luna (the power of the moon). Una luna italiana is no ordinary heavenly body. One of the most magical sights I’ve seen in Italy is the rising of una luna rossa (a red moon) from the sea. Scientists explain this as un’illusione ottica (an optical illusion) that occurs when the moon is bassa sull’orizzonte (low on the horizon). It appears red for the same reason that il sole all’orizzonte (the sun on the horizon) is red —la stessa illusione ottica (the same optical illusion).

But the “Luna Rossa” — the name of the Italian sailing team that competes in international races — that shimmered on San Francisco Bay last week was no illusion. Nella settima e conclusiva prova (in the seventh and final race) of the America’s Cup World Series, the Luna Rossa Piranha, one of two Prada-sponsored boats, ha vinto (won). La squadra (the team), headed by the British Olympian Chris Draper, placed seconda nella classifica finale (second in the final rankings) -– behind one of the U.S.A.’s Oracle-sponsored boats and ahead of Team Korea.

This week brings a moon of a different color: blu (blue), which describes la seconda luna piena in un mese (second full moon in a month). It can occur only when the first moon becomes full at the very beginning of the month, which happens every two or three years. And so we describe an uncommon event as happening “once in a blue moon.” The expression would literally translate as “una volta ogni luna blu,” but Italians don’t use this phrase. Instead they say “a ogni morte di papa” (at every death of a pope) — a far rarer event.

La luna, which can also be nuova (new), crescente (waxing) or calante (waning), doesn’t just appear in Italy's night sky. Someone with extravagant wishes may be said to chiedere la luna (ask for the moon). Italians refer to a fetus as being ancora nel mondo della luna (still in the world of the moon, or not yet born).

Some folks are so absentminded or detached from reality that they seem to vivere nel mondo della luna (live in the world of the moon) while others are so cranky that they avere la luna storta (have the crooked moon). In these hard times more people find themselves struggling to sbarcare il lunario (make ends meet).

An Italian lunatico may be temperamental but isn’t necessarily as wacky as an English lunatic. But do watch out for anyone who tries to fare vedere la luna nel pozzo (make you see the moon in a well). He’s just stringing you along.

For a dramatic video of the launch of Luna Rossa, click below: