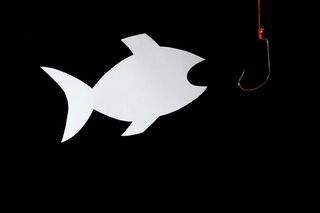 According to legend, a raven on Noah’s ark set off on April 1 to search for a sign that the flood waters had receded, but it never returned. Others trace the madcap holiday back to the year 1564, when Pope Gregory introduced a new calendar that changed the beginning of the new year from April 1 to January 1. Some people who didn’t believe or wouldn’t accept the change kept celebrating New Year’s Day on the first of April. Others tried to show how silly these original April fools were  by sending them on pointless errands or tricking them into thinking something false was true.

Somehow the fool came to take the form of a fish in Italy.  Children try to tape a paper cutout of a little fish  (pesciolino) to the back of a schoolmate. “Have you seen it?” they chant. “Who?” the unwitting child asks.  “Il pesce d'aprile!”

In a country of pescatori (fishermen), and marinai  (sailors ), il pesce swims through daily life—and language.  In Italian you’re sano come un pesce  (healthy as a fish rather than an ox).  A big shot is un pesce grosso (big fish).  But be wary: I pesci grossi mangiano i piccini. (The big fish eat the small fry.)

You don’t need a pole and bait to go fishing in Italian. Buttarsi a pesce (literally throw yourself like a fish) means to dive into an activity headfirst or with enthusiasm. Non sapere che pesci pigliare (not know which fish to catch) refers to being at a loss and not knowing which way to turn. Rather than the early bird catching the worm, in Italian chi dorme non piglia pesci (he who sleeps doesn’t catch the fish.)

But in Italy, as everywhere,  “L’ospite è come il pesce; dopo tre giorni puzza.”  (A guest is like a fish; after three days it stinks.)

*trattare a pesci in faccia — to mistreat, to humiliate, to mortify

*un pesce fuori d'acqua — a fish out of water

*prendere un granchio — to take a crab (make a blunder, overshoot the mark)

Dianne Hales is the author of Mona Lisa: A Life Discovered and La Bella Lingua: My Love Affair with Italian, the World's Most Enchanting Language.

← Italian You Won't Learn in Class: "Wrong" Ways to Use the Imperfect Tense A Foreign Correspondent on Italians and the Italian Language →
FOLLOW BY RSS