Playing a Role in the Italian Language 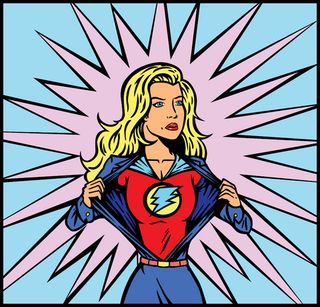 People often can't resist the chance to fare una parte (play a role). Some haughty souls may try to farla da gran signore (act  like a nobleman). Others may fare il bullo (act tough), fare lo gnorri (act dumb), fare lo  splendido (be a show off) or fare lo spiritoso (be funny) — sometimes only to end up fare il fesso (playing the fool). This summer I got a chance to fare l’eroina (play the heroine).

On a dark and windy night, my husband  Bob and I were eating dinner in a second-story glass-enclosed sunroom of our rented villa. A sudden gust of wind slammed shut (ha fatto sbattere) the door of the newly constructed enclosure.

As we heard the lock click, we realized that the key (la chiave) was on the outside of the door (dall’altra parte della porta). At 10:00 p.m. on Saturday, with no telefonino and no one within shouting distance or even scheduled to come by until Monday, we were trapped inside (intrappolati dentro).

The only way out was a window (finestra) above  the makeshift bamboo roof that shaded the patio below. But thin reeds rolled over plastic sheeting seemed too fragile to hold my six-foot-four-inch husband.  Much smaller and lighter, I figured that I could climb out the window and drop onto the roof without too much difficulty. But how would I get to the ground  twelve feet below? Un salto nel buio (a leap in the dark) didn’t seem a good idea.

It was not the moment to dwell on my lifelong fear of heights (paura delle altezze). I hoisted myself up and over the windowsill, but the bamboo and plastic began to give way as soon as  my feet touched the roof.  I would have to andare carponi or gattonare (go on all fours, like a big cat).

Feeling very much the cat burglar, I padded to the rose-covered column at the lower right edge of the roof. But, as the Italians say, there is no rose without thorns (non c’è rosa senza spine). Unable to grasp the spiky branches, I quickly abandoned the idea of scrambling down them.

Scooting over to the left roof edge, I found grape vines (viti) encircling another stone column and above it a wire crossbar — rusty (arrugginito) but sturdy. Ten years of upper body training suddenly proved worthwhile. Grasping the bar with both hands, I swung my body weight off the roof and dangled (fare penzolare) in mid-air.

Then I tried another animal imitation: fare la scimmia (making like a monkey). Vine by vine, I sidled down the column to about three feet from the ground and jumped, landing solidly on both feet.  As if fare la campionessa olimpica (playing an Olympic champion), I shot my arms overhead in victory.

Although I can’t claim to  farne più di Carlo in Francia (do more than Charlemagne or lead an extraordinarily exciting life), the memory of this little adventure — although nothing to fare notizia (make the news) or fare scalpore (cause a sensation) — nonetheless mi fa sorridere (makes me smile).

Click below for a song about "playing" the American:

← A Linguist’s Top Three Tips for Speaking the Italian Language The Most Cherished Italian Space: The Piazza →
FOLLOW BY RSS