Groundhog Day in the Italian Language 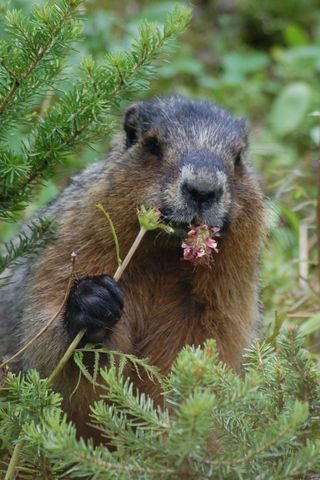 I have always thought of February as un grande mese (a great month) for celebrations — of the American presidents Washington and Lincoln, Valentine’s Day, Carnevale, my parents’ wedding anniversary. My birthday (il mio compleanno) on February 2 coincides with Groundhog Day in the United States, when all eyes turn to an oversized furry rodent in Punxsutawney in my home state of Pennsylvania. If he sees his shadow and scoots back to his burrow, winter continues for another six weeks. If not, Spring will come early.

There is no “giorno della marmotta” in Italy, where the word once doubled as an insult meaning “dunce” or “lazybones.”  According to the Italian version of Wikipedia, la marmotta, un genere di roditori (a type of rodent), is famous for il letargo (lethargy). During six months of hibernation when it sleeps profoundly (dorme profondamente), its heart slows to fifteen beats a minute (15 battiti al minuto), and its breathing becomes barely perceptible (appena percettibile).

Its other remarkable trait is its ability to communicate. When una marmotta smells danger, it stands upright on its hind legs (zampe posteriori), poised like a candle (nella posizione a candela) and emits a cry like a whistle (un grido simile a un fischio) to warn its furry friends.

According to experts, this sound constitutes a real language (un vero linguaggio)—and a warning of bad weather. As a proverb from Valle d’Aosta says, “Se la marmotta fischia insistentemente al pomeriggio, pioverà nelle ventiquattro ore successive.” (If the groundhog whistles insistently in the afternoon, it will rain in the next 24 hours.)

I prefer the Italian name for February 2: la Candelora (Candlemass), which commemorates the purification of Mary after the birth of Jesus. On this day, priests bless the candles (candele) that will be used during Mass and other religious ceremonies throughout the year.

Long before Punxsutawney Phil became famous, Italians were using the weather on this feast day to predict the coming of Spring. “Per la santa Candelora” (For holy Candlemass), according to one proverb from northern Italy, “o che nevichi o che plora, dell’inverno siamo fuora; s’egli ‘e sole o solicello, siamo ancora a mezzo il verno.” (If it snows or rains, we are out of winter; if it’s sunny or partly sunny, we are still in the middle of winter.)

More enigmatic is the saying, “Per la Candelora, chi non ha carne impegni la figliola” (For Candlemass, whoever hasn’t got meat should pawn their daughter). My Italian friends interpret it as meaning that you absolutely have to have some meat to enjoy Carnevale, the grandest of February's feasts.

Unfortunately, those born on February 29 get to celebrate their actual birthdays only once every four years–during an anno bisestile.

Se la viola esce a febbraio, tieni da conto fieno e pagliaio –- if the violet comes out in February, store away your haystack.