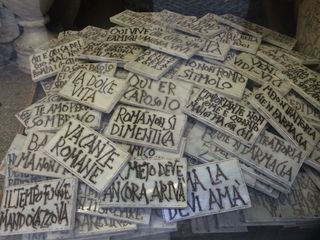 As every visitor discovers, you can find everything and buy anything in Rome, including words (parole) for sale in a shop on Via Margutta. La città eterna (the eternal city) never ceases to surprise me. If the crowds on its streets are an indication, tutte le strade (all roads) continue to lead to a city famous for le sue virtù e i suoi vizi (its virtues and its vices)–and its language.

Traces of Rome's linguistic history remain everywhere in the city, including the tops of manhole covers, which are emblazoned with S.P.Q.R., the ancient Latin abbreviation for the Senatus Populusque Romani, "the senate and people of Rome." Contemporary Italians irreverently joke that the initials really stand for "Sono pazzi questi romani" (They're crazy, these Romans).

Via Condotti, lined with elegant designer shops, was named for the aqueduct, or conduit, built in 19 B.C. to carry acqua vergine (virgin water) from a spring in the Alban hills south of the city. According to legend, a local young girl led Roman soldiers to the site—a discovery that the parched city celebrated for 59 days.

For centuries people bought or leased horse-drawn carriages on one of its cross-streets, Via delle Carrozze (carriages). Nearby Via della Bocca di Leone (Street of the Lion's Mouth) was named either for a statue of an open-mouthed lion or for an opening that looked like a lion's mouth leading into a sewer line.

With hundreds of water-spouting sculptures, Rome is known as la città delle fontane. In front of La Scalinata (the Roman term for what tourists call the Spanish steps), Pietro Bernini built the fountain La Barcaccia (old boat), designed to recall the floods of 1621, when the Tiber overflowed and left the wreck of a battered boat in its wake.

Roman idioms rank among Italy's most colorful.  A Roman friend describes a local politician as “the best cat in the Colosseum” (which is overrun by feral  felines), the figure who comes off best in a difficult situation.

“To remain like Father Falcuccio,” another idiom in Romanesco (the local dialect), refers to a hypothetical priest who, having lost his clothes, had to cover his naked private parts with  “one hand in front and another one behind.” A Roman ends up in this hapless predicament when, for instance, he wrecks his car before paying off the loan or his wife finds him with his mistress and both women dump him.

Classic movies made Romans' lifestyle as well as phrases such as La Dolce Vita famous. The most recent Italian Oscar winner for best foreign film continues the tradition.  Among the sayings I spotted around town: "La grande bellezza sei solo tu"  (Only you are the great beauty).

Quando ce vo' ce vo'  — Romanesco for "When it's needed, it's needed," meaning there is no choice.