Bad Weather in the Italian Language 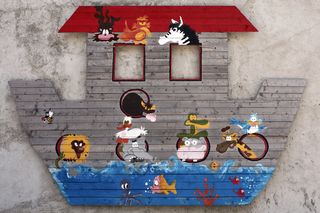 Not long ago we were reading bulletins like these about flooded areas in the eastern United States. The latest reports come from Italy, where downpours (acquazzoni) have allagato (inundated) much of the country, from Venice in the East to the Maremma in the west.

“Albinia è disastrata,” a friend e-mails from the village in western Tuscany termed the "epicentro della catastrofe” (epicenter of the disaster). The entire town was “sommersa dopo l'eccezionale ondata d’acqua” (submerged by an exceptional wave of water).

Many people took refuge (si sono rifugiate) on roofs (sui tetti). Others barricaded themselves on the high floors of their houses (ai piani alti delle case). Some were rescued by Vigili del Fuoco (fire and rescue workers) in helicopters (elicotteri) that shuttled up and down (hanno fatto la spola) to reach people who remained isolated in their homes (per cercare le persone rimaste isolate nelle loro case).

"L'acqua ci ha preso alle spalle" (the water hit us on the back), said one resident. Now la gente (the people), con una scopa in mano (with a broom in hand), are trying to ricacciare (drive back) l’acqua marrone (brown water) from their cucine e salotti (kitchens and living rooms).

The countryside in Umbria also has been alluvionata (flooded). In some places an ocean of mud (fango) swept away houses and shops. Volunteers called angeli del fango (mud angels) are working to help homeowners salvage their property.

Il Tevere (the Tiber) overflowed its banks in areas north of Rome. A kennel of dogs (gli ospiti di un canile) perished when the level of the river rose too quickly (il livello del fiume è salito troppo velocemente) for a rescue. Some bridges were damaged and roads flooded, leading to caos alla circolazione (traffic chaos).

“Hai bisogno di qualcosa?” (Do you need anything?) I asked a friend in the hard-hit Maremma, which declared un stato di emergenza (state of emergency).

If the worldwide maltempo (bad weather) continues, sooner or later we all may end up in the same boat.

Click below for a news report in English on the flooding: