This year marks the 500th anniversary of the death of a Renaissance painter hailed for achieving graziosissima grazia, the most graceful grace. Raphael of Urbino, born in 1483,  was talented, affable, kind and drop-dead gorgeous.

Raphael’s artistic genius sprang from his uncanny ability to reproduce a master’s style so adroitly that he first equaled then surpassed him. Criticized for a lack of majesty and grandeur in his pretty paintings, he knew the perfect tutor: the ferociously solitary Michelangelo, who had locked himself in the Sistine Chapel to paint scenes from the creation on its ceiling.

When Michelangelo, squabbling with the Pope, stalked off to Florence in 1511, the sculptor Bramante, who had the keys to the chapel, smuggled his friend Raphael in for a clandestine visit. After viewing the work-in-progress, Raphael immediately added a Michelangelesque figure (believed to be the master himself) to his current painting, “The School of Athens.” 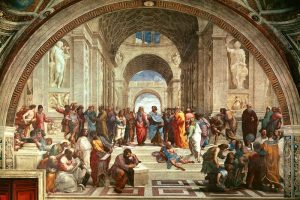 “All that Raphael knows of art, he got from me,” Michelangelo thundered. Raphael, for his part, described his temperamental critic as “lonely as a hangman.”

In Raphael’s defense, he also sought out his own inspiration. While he was working in Rome, archaeologists were excavating the Domus Aurea, Nero’s golden house, near the Colosseum. In order to study first-hand the vividly colored decorations painted on its walls, Raphael had himself lowered into the cave (grotta). The designs that he reproduced in his works came to be known in Italian as grottesca. Their ornate, stylized forms gave rise to the English “grotesque.”

As a papal favorite and  the toast of Rome, Raphael lived like a prince, showered with lucrative commissions, sought after by the rich and powerful, even offered a cardinal’s niece in marriage. This “very amorous man,” as the art historian Vasari delicately puts it in The Lives of the Artists, “was fond of women … and always quick to serve them.” When an infatuation distracted Raphael from completing a commission for a cardinal’s home,  his patron moved the painter’s  mistress into the palazzo where he was working.

Ultimately amorous pursuits — which he tried to conceal — proved Raphael’s undoing. After a night of even more “immoderate” indulgence than usual, Vasari reports, he returned home with a very high fever. Because he didn’t tell his doctors of “the excesses he had committed,” they bled him in such a way that he grew progressively weaker and died. He was 37. All of Rome wept, except for Michelangelo, whose only comment was, “My thief is dead.”

The passionate painter was buried with sorrow and ceremony in the Pantheon. Whenever I visit the temple turned church turned tourist attraction, I never fail to pause at his tomb and read the poignant epitaph: “Here lies Raphael, by whom nature herself feared to be outdone while he lived, and when he died, feared that she herself would die.”

Museums in Rome, Milan, Urbino and other cities are presenting special exhibitions to honor Raphael this year. You can find a comprehensive list in Italy magazine’s round-up of Raphael commemorations.