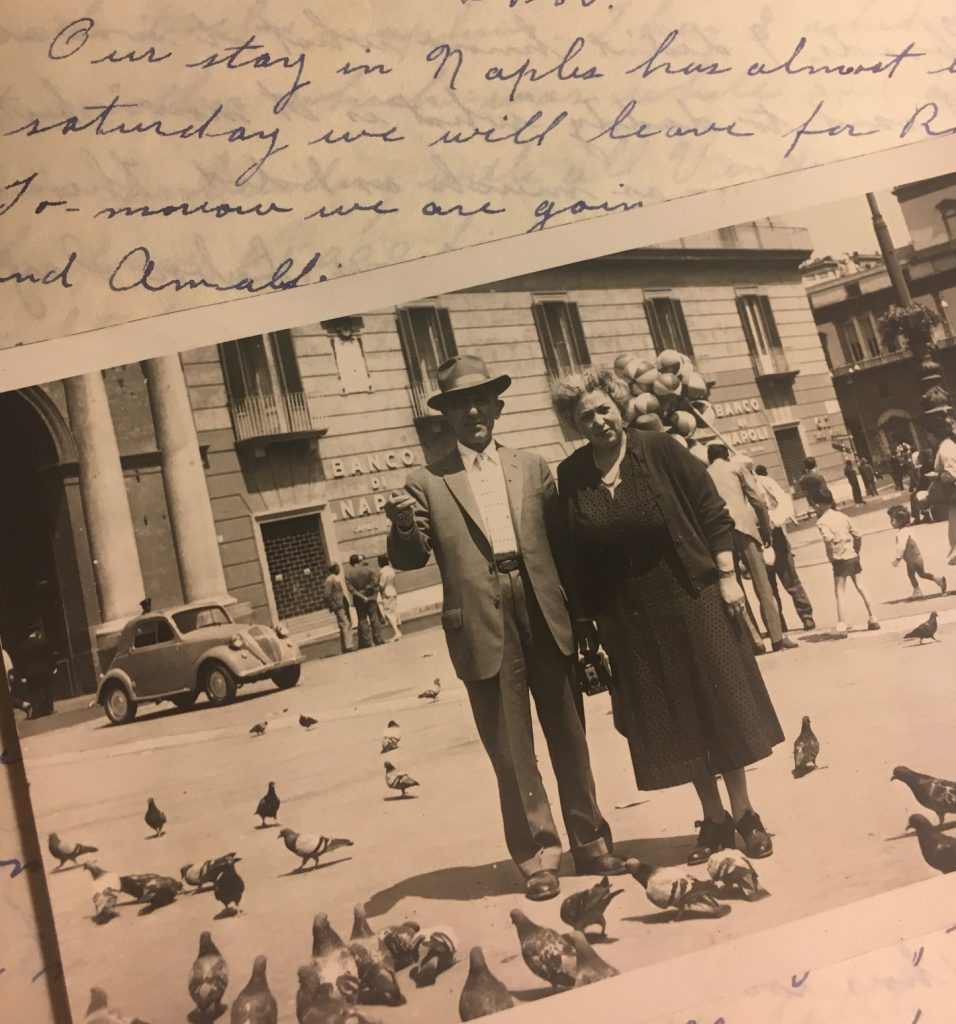 In this time of uncertainty, there has certainly been  time to clean out closets. At the bottom of  mine was a pile of letters my Nana had written to my mother, from a trip she took to Italy in 1957. When I first skimmed them, they reminded me of a story Nana told me over and over when I was a kid. It began with her apologizing to me for not being around when I was born, telling me she’d been on a trip to Italy with my grandfather. Again and again I heard how a telegram arrived at their Venice hotel, and the story always ended with the words: “I ran out to the Grand Canal and told all the gondoliers Baby Susanna was born!”

Gathering up Nana’s letters, I found the famous telegram, but as always happened when I imagined Nana’s story, I got stuck on a part that never rang true for me. The part where Nana told me she ran.

Nana’s movement style was more of a slow waddle, from stove to kitchen table to rocking chair to bed. The Nana I remember was a soft, round woman who wore aprons tied under her baggy arms to shield her large shelf of bosom. She never drove a car, dyed her hair, or wore pants. At her most magical, she was in the kitchen with her wooden spoon or handing me a dollar bill from her worn out black leather handbag.

I cuddled up on the couch with Nana’s letters, arranged in chronological order. Hours drifted by as I followed a long, leisurely trip that began with a transatlantic crossing on the Cristoforo Colombo, where Nana raved about all the activities — Mass, dances, and how Papa loved flirting with the pretty young blondes.

They landed in an Italy I’ve only seen in movies: a chaotic scene at the Naples port with facchinos vying for tips. In my Papa’s hometown of Potenza, she described a grand reception put on by elderly signoras all dressed in black. She adored Rome’s La Dolce Vita ambience, swooning over the elegant scene at Doney’s on the Via Veneto, where they stopped to join the fancy Americans for vermouth one evening.

Nana had left the village of Vinchiaturo in Molise with her whole family when she was three years old. My grandfather had come to America on his own from Potenza when he was 18. He landed in New York’s Little Italy, got work as a carpenter’s assistant in a piano shop, and with his earnings, one by one, sent for his sisters and parents to join him.

Fifty-plus years later  Nana and Papa had achieved the American Dream. They lived in a big house in Newark, raised four children, and put them through college. After Papa retired as an insurance salesman, they celebrated by returning to Italy.

My grandmother’s letters brought me not only to a different Italy, but to a different Nana. They were written by a lively 56-year-old woman, who enjoyed nights at the opera — from Naples’ San Carlo to Milan’s La Scala and walked for hours tirelessly discovering new cities. She joked that she might forget how to cook since her Italian family and friends, in her words, “went to so much trouble”  to welcome  her with lavish feasts.

Nana clearly thought she’d be going back to Italy. She had no idea that soon cancer would gradually turn her into a sad semi-invalid. The magic Nana I knew as a kid would fade. She’d never return to Italy, where for that Spring in 1957, she truly lived a dream.

After finishing the last letter, I poured a glass of Chianti and  toasted  this “new” Nana. Finally, after so many years, I had no doubts about her story. I could see Nana along the Grand Canal in Venice on the day that I was born, with all the joy inside of her, running.

*Click here for the original unedited version of this essay.

Italian American Susan Van Allen is the author of four books about Italian travel, including the 10th anniversary edition of  100 Places in Italy Every Woman Should Go.  She also designs and leads Golden Weeks in Italy: For Women Only.  Visit her website for more information.

← The Sweetness of September in Italy Italy's Beloved Poet: Why Dante Matters →
FOLLOW BY RSS