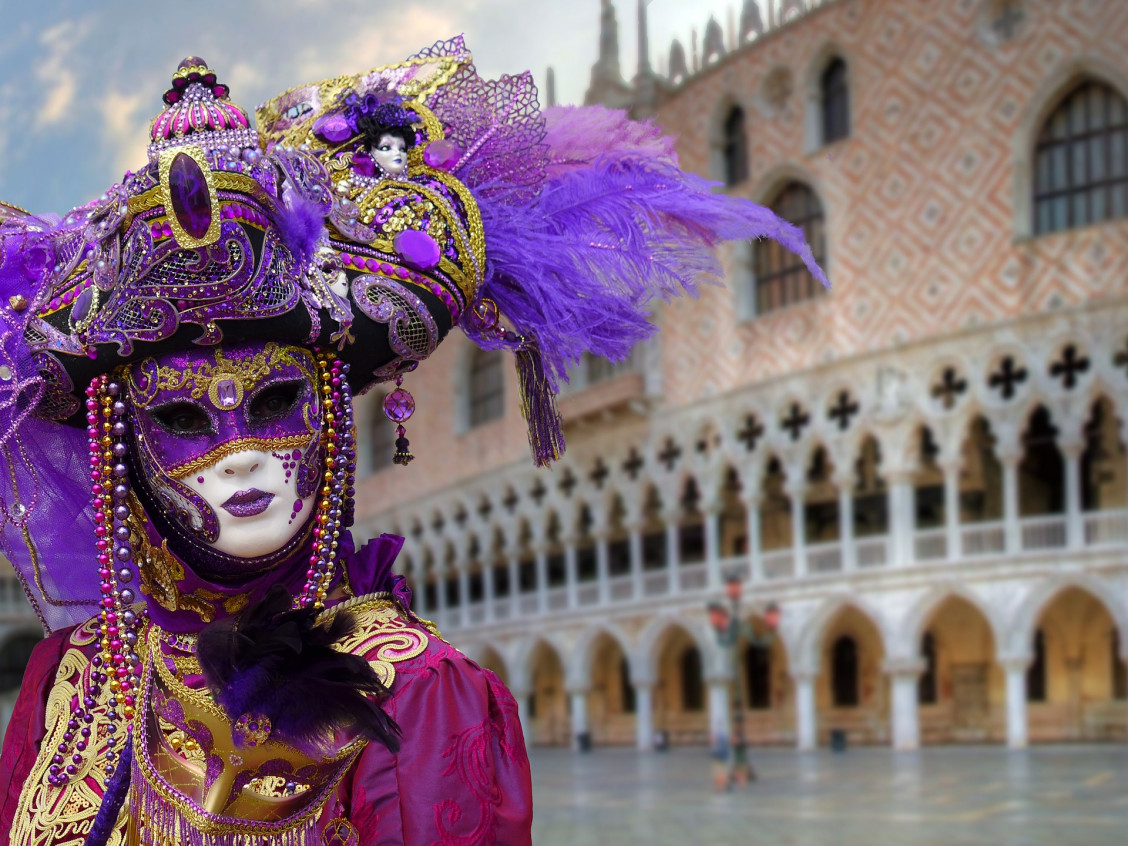 This year the Venice Carnevale will be different. “Traditional, emotional, digital,” its organizers promise—and available to everyone everywhere via social media channels and virtual rooms (including one for the Best Mask Contest). Click here to find out more about the festivities, which begin February 6 and extend through February 16. I’m also revisiting a memory of Carnevale a few years ago in Venice:

On a chilly night in February, a gigantic silver balloon rose above a Venetian canal like a moon lassoed from the sky. Dangling below, an acrobat gyrated into a spinning star. Sky ballerinas with huge butterfly wings fluttered around her. Giant ten-feet-high anemones unfurled long filmy tendrils. Fire dancers on gondolas juggled flaming torches.

This was not the Disneyfied Carnevale of elaborate costumes and expensive balls that, in pre-Covid years, attracted tens of thousands of visitors but a simpler, smaller, sweeter celebration held in Cannaregio, the working-class neighborhood where the highest percentage of native Venetians live. During this magical evening, I heard no languages other than Italian and Venetian. Children scampered in Harlequin costumes (with a few galactic superheroes in the mix). Women swirled in the flowing robes of another age; men donned the long-beaked masks of plague doctors. Confetti fell like snowflakes. This scene, which I describe in La Passione: How Italy Seduced the World, captured the particularly exuberant spirit of Carnevale in Italy.

For centuries the pre-Lent festivities of Carnevale have celebrated carne, which translates as both “meat’ and “flesh.” However, the name comes specifically from the Latin for “meat” (carnem) and “take away or remove” (levare). A church decree dating back to 653 declared that anyone who ate meat during the forty days of Lent (Quaresima in Italian) could not receive communion on Easter. Charlemagne reportedly sentenced Lenten meat-eaters to death. Carnevale was gradually extended to cover the entire period from Epiphany to la settimana grassa (the fat week) before Ash Wednesday. The sin-drenched Venetian Republic became famous for indulgences of a more sensual nature. During its Carnevale, which lasted for months, party-goers of all classes hid their identities behind elaborate maschere (masks).

An almost pagan spirit of enjoyment and transgression is evident in the traditional recipes for this time of year. Southern Italians prepare a migliaccio di polenta made with corn meal, sausages and grated cheese. Neapolitans savor lasagne di Carnevale, a dish so rich that poorer families could afford to prepare it only once a year. Throughout much of the peninsula, Italians enjoy sweets such as castagnole (sponge balls, plain or filled with ricotta cheese, custard or chocolate), tortelli with raisins and cinnamon and cicerchiata (pastry balls coated in honey).

Italy’s pre-Lenten merry-making has inspired some pithy axioms: “A Carnevale ogni scherzo vale,” revelers often say. “Anything goes at Carnival time.” But don’t get carried away with the romance of the moment. “L’amore di Carnevale muore in Quaresima,” wise souls caution, “A love that starts during Carnival dies in Lent.