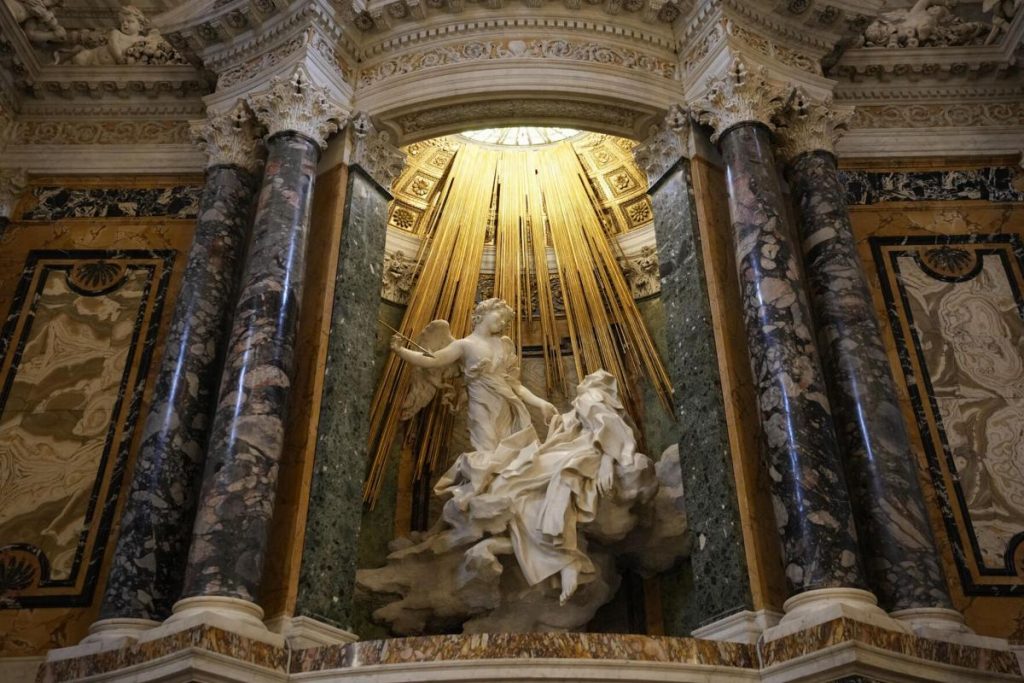 Rome, the dome-capped city of gushing fountains, monumental staircases and sunlit piazzas, owes much of its seductive beauty to Gian Lorenzo Bernini (1598–1680. Over his long career Bernini emerged as the Michelangelo of his time, a master sculptor, architect, painter, city planner, draftsman, engraver and scenographer.

The son of a sculptor, Bernini began working with his father in Rome as a boy while diligently sketching the Vatican’s masterpieces, one by one. If he didn’t return home for dinner, his father knew that he was with his “girlfriends” —as Bernini called the art works.   Throughout his long career, he would work uninterrupted from dawn to dusk. “Let me be,” he’d say to assistants who tried to coax him to pause for a meal, “I am in love.” Going to work, he often said, was “like entering a garden of delight.”

One of Bernini’s earliest patrons, Pope Urban VIII, presented the young sculptor with the Eternal City itself as a canvas. “You were made for Rome,” he told his appointed “impresario supreme,” in charge of its art, buildings, fountains and public works, “and Rome was made for you.”  Bernini assembled a small army of subcontractors and transformed the landscape of central Rome.

With a passion flaring into obsession, Bernini hounded his workers, who trembled in fear of his fury.  Yet he drove himself hardest of all.  His son described his father as entering “a state of ecstasy, as if he were sending out through his eyes his own spirit in order to give life to his blocks of stone.” To his contemporaries, Bernini’s fierce drive testified to a supernatural creative spark that God instills in only a few geniuses in every age.

After nonstop artistic and architectural triumphs, Bernini suffered a humiliating public failure in 1636. A bell tower he had created for St. Peter’s developed cracks that some feared might trigger the collapse of the entire facade.  Bernini’s enemies accused him of jeopardizing Catholicism’s Mother Church. His financial assets were seized, and he lost his private patrons.  The devastated artist took to his bed and stopped eating, starving himself almost to the point of death.

A  new commission  revived his passion and career: a statue of Santa Teresa, the founder of the Discalced (shoeless) Carmelite sisters, for a private chapel in Rome’s Church of Santa Maria della Vittoria.  Teresa, a dumpy middle-aged nun plagued with disfiguring maladies, had described mystical unions with God that induced periods of levitation when she appeared to float in mid-air.

Bernini depicted one such gravity-defying moment—with considerable artistic liberty.  In his sculpture, a radiant young woman, pierced by the arrow of divine love, trembles in ecstatic response to “the sweetest caressing of the soul by God”  — her eyes closed, mouth open, arms outspread, a naked foot dangling from beneath the swirling drapery. His contemporaries were horrified that he had “put a scene of explicit sex inside a church.”  Bernini’s defenders argued that the Baroque era unleashed such potent religious passions that physical and spiritual, sacred and profane, melded into one.

A new restoration, which included cleaning of the statue, the entire chapel and the window that illuminates it, has revealed  “an explosion of colors”  and brought back to radiant  life the sculpture that Bernini considered his “least bad” work. The next time you’re in Rome, don’t miss Santa Teresa in ecstasy in all her passionate glory!

← St. Martin's Summer in Italy A Life Lesson from an Italian Professor →
FOLLOW BY RSS