Who knows what in the Italian language? 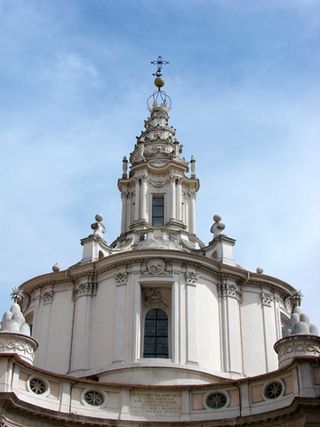 English speakers “know” everything—how to drive a car, long division, the folks who live next door, a great hiking trail. I “know” the Italian language, but I still have trouble saying how I know it. In Italian I would use the verb sapere to say that I know how to conjugate verbs or the year of Michelangelo’s birth.    But if I want to say that I know Sorrento, Renaissance art, or the local butcher, I need an entirely different verb: conoscere.  All too often I find myself scratching my head and asking the utterly Italian question: Chissà?  (Who knows?)

Sapere comes from sapia, Latin for taste, the root of sapienza, Italian for wisdom. Several of my wisest Italian friends graduated from La Sapienza, Rome’s great university, pictured above.  They sanno (third person plural for know) all sorts of things, from how to play the piano to entire cantos from Dante’s Divine Comedy.   One of Leonardo da Vinci’s famous life mantras was saper vedere, to know how to see.

It’s not just  our species of Homo sapiens (wise man) that is capable of sapere.  When I tucked fresh lavender under the pillows in the guest bedroom, an Italian visitor happily reported that her bed “knew” (smelled of) the flowery scent.  If you add fresh rosemary, a sauce will “know” (taste of) this flavor. And if something is not to the liking of you and a friend, you can say that it “non sa nè di me nè di te.” (It doesn’t know, or taste of, me or of you.)

Conoscere, which shares the same root as the English words cognition and recognize,  implies something deeper: getting to know a person,  being familiar with a city or country, becoming knowledgeable about a subject like music or architecture. “Piacere di conoscerLa,” (“Pleased to know you,”) you say when introduced to a stranger in Italy.  "Conosco i miei polli," (I know my chickens) an Italian will say to indicate that he knows the people he is dealing with very well.  Scholars strive for  conoscenza, which means knowledge or acquaintance in all senses.

“Sai la canzone ‘O sole mio’?”  a roving accordion player who had wandered into the restaurant where we were having dinner once asked. Thinking he was asking if I had heard of the famous song, I replied, “Si!”  Next thing I knew he had whirled me to his side and stuck a microphone in front of my face. It turned out that while I knew of the song, what he was really asking was if I knew how to sing it.