Saving the Church of the Patron Saint of Joy 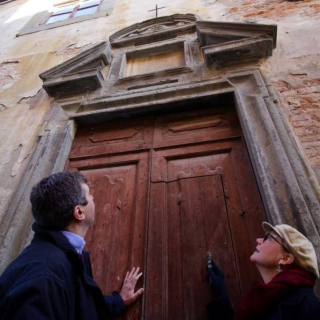 I confess. I’m Catholic, and I’d never heard of Saint Philip Neri — until I decided to save a church dedicated to him in Castiglion Fiorentino, a small town in Tuscany between Arezzo and Cortona.

In its historic center, on the same pedestrian-only vicolo as the apartment my husband Tim and I purchased in 2011, a boarded-up stone building dating back to the Middle Ages sits virtually unnoticed. In the late 1600s and early 1700s, this was the living quarters for priests serving the community. No one had been inside the structure for over fifty years. Too dilapidated and dangerous (troppo in rovina e pericoloso).

Located below the priests’ living quarters is a little chapel (una piccola cappella) dedicated to St. Philip Neri, whose feast day is celebrated this week. “The joyful saint” (il santo della gioia) was renowned for his humility and sense of humor, as well as his love and compassion for the homeless, the sick and the needy, and especially for children. St. Philip often would say, “Be good if you can” (“State buoni se potete”), exhorting his followers to practice charity, cheerfulness and humility (carità, allegrezza ed umiltà).

San Filippino was a bustling community center in the 17th and 18th centuries, a place where ordinary people did and experienced extraordinary things (cose straordinarie). Now, its crumbling exterior is hidden behind recycling bins and parked cars. For three years, Tim and I walked past the sad structure and wondered: Why was this building so rich in history being allowed to disappear? Why wasn’t anyone doing anything to save it? The response: Crisi. Niente soldi. (Economic crisis. No money.)

One day, for a reason that is difficult to explain, I realized that the “someone” to save San Filippino was me (la persona che doveva salvare San Filippino ero io) and, by default, my husband Tim. Neither of us had ever attempted anything like this. At that point, we had not even seen the interior of the chapel.

After a meeting in Arezzo with Archbishop Riccardo Fontana, we found ourselves inside San Filippino. We were blown away. (Siamo rimasti estasiati.) We saw beautiful cherub sculptures that are some of the finest examples of baroque art in Tuscany. An ancient 15th century wooden coffered ceiling of stunning cobalt blue and gold, believed to be the oldest in the town. A gorgeous hand-painted wooden balcony comprising the choir. Intact frescoes. And that’s just for starters! (E questo tanto per cominciare!)

Yes, there’s obvious damage due to neglect, a leaky roof and excrement from curious pigeons who have found their way in via the broken windows. Nonetheless, the chapel is still stunning, and we have fortunately arrived in time to return it to its original glory (riportarla alla sua gloria originale).

How much money do we need? Only $350,000, per the official estimate provided by the Archdiocese of Arezzo, to completely restore the interior and exterior of Oratorio San Filippino. After restoration, the chapel, which is still consecrated, will host religious and secular services benefitting the whole town and will provide a much-needed economic spark for our adopted town (nostra città adottiva).

We’ve created a tax-exempt 501(c)(3) nonprofit association in the U.S. — Friends of San Filippino – with 100 percent of donations going toward the restoration. All work is done by volunteers, most of them citizens (cittadini) of Castiglion Fiorentino! Once word spread about the project, via our Facebook page and our website, the townspeople enthusiastically joined in. Professionals (accountants, photographers, engineers, business owners, among others) are donating their services, and local artists are donating their works, with proceeds to benefit the project. A group of Castiglionesi have created a sister organization, Amici di San Filippino, and have already started holding fundraisers.

Let me be more like St. Philip, I pray. (Fa che sia ancora di più come San Filippo, io prego.) May I always remember and heed his call-to-action: “If you wish to go to extremes, let it be in sweetness, patience, humility and charity.” I’m hoping this project inspires others to do the same.

Rita Morgan Richardson is a French teacher in Nashville and an Italian-American with roots in Naples and the little town of Vinci in Tuscany. Write her at info@friendsofsanfilippino.org for more information on the campaign to save San Filippino. Click here for a longer version of this story, which was first published in La Voce di New York.

Photos of Rita and Tim by Piero Rossi.