Secrets from an Italian Kitchen 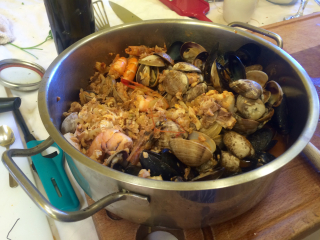 I segreti in cucina di Viola

In the lemon-yellow kitchen of the Italian Consulate in San Francisco, the extraordinary chef Viola Buitoni shared the seafood recipes that her mother had taught her in their summer house by the sea. Every dish, made from scratch by eight attentive students, was delicious, but what I recall most are the secret techniques that Viola passed along for each one.

*Acciughe all’ammiraglia (marinated anchovies, "flagship-style"). Stauncher souls than I took on the smelly task of slitting the slippery underbellies of Ligurian anchovies with a fish knife (coltello da pesce), removing the spine (la spina) and head (la testa) and then flattening them open like a book. Then we “cooked” them—with nothing more than lemon juice. After the anchovies marinated for an hour in their citrus bath in the refrigerator, we topped them with diced garlic, parsley and pepper and served them on toasted bread. They tasted unlike any anchovy I'd eaten before.

*Polpo in insalata (octopus salad). Start with a very big pot and an octopus (available at specialty fish stores). Add lemon strips, garlic, salt, bay leaves, parsley and peppercorns to cold water and bring it to a boil. Then grab the octopus by the head and dunk the tentacles three times so they curl. Why three? “For the Father, Son and Holy Spirit” (Per il Padre, il Figlio e lo Spirito Santo)," Viola explains. Italians often invoke the Holy Trinity to ensure that anything—even an octopus—turns out well. Ours did.

*Zuppa di pesce (fish soup). At the end of the day, fishmongers would scoop the fish that didn’t sell into a piatto di recupero (leftover or recovery plate). For our base, Viola chose a whole red snapper. How did she know it was fresh? By the eye (l’occhio), which looked straight back at us. By the tail (la coda), which curled upward. And by the flesh (la carne), which bounced back when gently pressed.

*Impepata di cozze (steamed mussels in a peppery broth). Should you throw out a mussel that's started to open prior to cooking? No, says Viola. Squeeze it or tap on the counter. If it starts to close on its own, it’s still breathing and good to go. If there’s a stringy “beard” protruding from the side, clasp the mussel’s hinge and tug downward on the strand until the mussel simply releases it.

*Pasta alla bottarga (pasta with air-dried mullet roe). I’d never seen the orange tubular egg sac of a mullet before I was instructed to peel and shave it into a bowl. We added the zest of a Meyer lemon, parsley, garlic and olive oil to create what Viola calls "sea magic." Then we boiled water for pasta.

How much salt to add to pasta water? (Quanto sale aggiungere all’acqua della pasta?) As Viola demonstrated, start with a fistful (una manciata). To test it, dip a finger (very quickly) into the pot and lick it. “It should taste like the sea,” Viola said, noting that salt changes the density of the water so pasta retains more of its nutrients and flavor.  After cooking orecchiette (the pasta dubbed “little ears”) just to the point of being “almost crunchy,” Viola stirred in the bottarga mix, which melted into the pasta. As a final touch, she added a large dollop of pasta water. Our taste buds felt as if they'd dived into the deep.

A final tip: To remove a fishy smell (odore di pesce), rub your fingers with lemon and salt—or against something made of stainless steel (acciaio inossidabile).

Squamare –- to scale a fish

Essere muto come un pesce –- to be as silent as a fish.

Dianne Hales is the author of the New York Times best-selling LA BELLA LINGUA: My Love Affair with Italian, the World's Most Enchanting Language and MONA LISA: A Life Discovered.