Soccer and Shame in the Italian Language 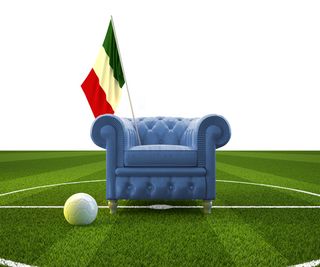 “VERGOGNA!” the headlines in the Italian papers screamed as the Azzurri (The Blues), defending champions, exited the 2010 World Cup in the first round. Everyone—including the players themselves—seemed to agree that they had brought vergogna (shame) to Italy, a grave offense in a country that prizes “bella figura” and considers calcio (soccer) a national religion.

"Ora ci faranno cavalieri della vergogna” (Now they make us Knights of Shame), Rino Gattuso, one of the players (calciatori), commented, “ed è giusto così" (and justly so). La Repubblica published a photo gallery of “le lacrime” (the tears) of the sobbing Azzurri after “la grande delusione” (the great disappointment). “Siamo distrutti” (“We are destroyed” said another member of the squad. “Il rammarico è enorme” (The chagrin is enormous.)

A small group of tifosi (fans, so-named because they act as feverishly as typhus or tifo patients) greeted the returning players in Rome with chants of “Vergognatevi, vergogna!” (Shame on you, shame!)

Vergogna (which contains the wonderfully Italian “gn” sound, as in gnocchi) carries the weight of centuries of meaning. Some seven hundred years ago Dante, father of the language, used it for “onta, disdoro, disonore” (shame, disgrace, dishonor). The medieval poet had very clear ideas of the consequences it deserved.

In his epic Divine Comedy, those who acted vergognosamente (disgracefuly) on earth spent eternity being whipped, bitten, crucified, burned, butchered, transformed into snakes and shrubs, buried alive in flaming graves, skewered into rocky ground, frozen in ice and immersed in pitch, mud, excrement or boiling blood.

Italians who brought vergogna to the people have also faced punishment at the hands of their countrymen. In the 15th century Florentines turned on Savonarola, the charismatic monk who destroyed books, jewelry, furniture and masterpieces of art in his infamous “bonfire of the vanities.” First they tortured him on the rack for three days (breaking every bone in his body except for those in the hand he needed to sign a confession of heresy), hanged him and then cremated his body in a giant blaze that burned for hours.

A single death also wasn’t enough for  reviled dictator Benito Mussolini. After the fall of the fascist regime, Italian partisans caught and executed Il Duce along with his mistress near Lake Como. Their bodies, taken to Milan, were kicked, spat upon and hung upside down on meathooks from the roof of a gas station. A crowd threw stones and shouted insults.

No one is suggesting such an extreme fate for the Azzurri, but for some time to come, wherever the famous (now infamous) players go, they are likely to hear whispers, if not cries, of “Vergogna!”

As human beings shamed to their very souls, they have my sympathy.
Yes, the Azzurri lost a world championship and injured national pride. But  more deserving of shouts of “Vergogna!” are those responsible for far graver consequences. My list would include the folks in charge at BP, Bernie Madoff and Wall Street wheeler-dealers,  who  all have so often seemed senza vergogna (shameless).

la vergogna della famiglia — the black sheep of the family

Grazie to Bob Sanfilippo for suggesting this topic! Click below to see a happier moment: the Azzurri singing Italy's national anthem before their first match at the 2010 World Cup in South Africa.