Singing in the Italian Language 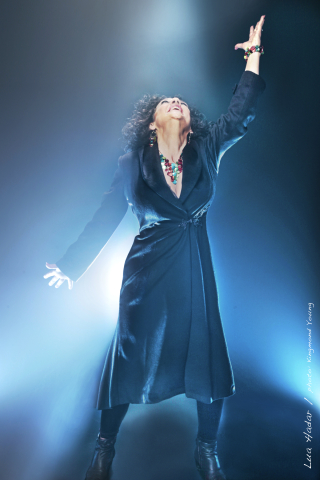 Lua Hadar, an international vocalist, speaks four languages and sings in seven, including Malagasy, the native tongue of Madagascar. But Italian brings out something special in her: “my passion.”

“I wasn’t born Italian, but I’ve loved everything Italian for as long as I can remember,” Hadar says. “I practically grew up in the kitchen of my best friend’s Italian family on Long Island.” She recalls listening to Italian-American crooners like Frank Sinatra and Dean Martin and singing along with her musician father.

Hadar’s eclectic career included training as an opera singer, five years working with children’s theatre companies in Italy and performing in cabarets and clubs in Europe and the United States. But she was drawn to Italian and Italian-American classics—songs she describes as “the soundtrack of my life”—because of the emotions they convey.

“They give me the opportunity to express my passion and connect with audiences,” Hadar say. The secret of this passion lies in the lyrics (nei testi delle canzoni). As an example, she cites the song Caruso (also known by its chorus of Te voglio bene assaje), written by the Italian singer-song writer Lucio Dalla in 1986 and dedicated to the famous Italian tenor.

During a visit to the coastal town of Sorrento, Dalla stayed in the Excelsior Vittoria Hotel, in the same room where many years before Enrico Caruso had spent some time before his death. The song evokes the love Caruso had for his daughter. Here is its famous chorus:

Te voglio bene assai   (I love you, you know, very much)

Ma tanto, tanto bene sai  (So, so much, you know)

È una catena ormai  (It is a bond now)

Che scioglie il sangue dint'e' vene sai  (That melts the blood inside the veins, you know)

Another of Hadar's favorites is Stregata dall’Amor (Bewitched by Love), the theme song from Federico Fellini’s La Strada, with its haunting melody and words:

Tu, che amar non sai (You, who do not know how to love)

Son quest’occhi tuoi (There are your eyes)

Ma che febbre nel tuo cuor! (But what fever in your heart!)

“You can’t sing lyrics like this without passion,” says Hadar, who has created an Italian-themed show with the contemporary jazz ensemble Twist, featuring songs such as Arrivederci Roma, Bella Notte (from Lady and the Tramp) and Volare. The next performance of “When in Rome” will be at Feinstein’s, a popular night club at the Nikko Hotel in San Francisco, on Thursday, November 10.

Canta che ti passa –- sing, and it will go away (as a way to take your mind off your troubles)

Far cantare qualcuno -– make someone sing (literally), get someone to talk/confess

Dianne Hales is the author of LA BELLA LINGUA: My Love Affair with Italian, the World's Most Enchanting Language, now available as an audiobook, and MONA LISA: A Life Discovered.