Smiling in the Italian Language 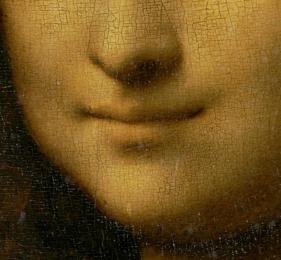 Ever since publication of MONA LISA: A Life Discovered, the question I’ve been asked most concerns her smile (sorriso)—or, more precisely, her half- or slight smile (sorrisino, sorrisetto). Italians refer to the painting as La Gioconda, a descriptive term for a smiling or joyful woman as well as a play on her husband’s name (del Giocondo).

Giorgio Vasari, the father of art history, lauded Mona Lisa’s ghigno, a word that translates as both “grin” and “mocking smile,” as “a wondrous thing, as lively as the smile of the living original … so sweet that while looking at it one thinks it rather divine than human.” Modern art historians view her expression as a technical tour de force. As they explain, most Renaissance artists, whose attempts at grins ended up looking like grimaces, saw the smile as an elusive Holy Grail. Leonardo da Vinci himself spent years experimenting with similar expressions until, with the gentle slope of Lisa’s mouth, he elevated his skills to an incomparable new level.

Sigmund Freud saw something more: shadows of Leonardo’s childhood. Mona Lisa’s expression, he asserted, “awakened something in him which had slumbered in his soul for a long time, in all probability an old memory.” Perhaps his mother, separated from him as a boy, “possessed that mysterious smile which he lost and which fascinated him so much when he found it again in the Florentine lady.”

Chissà? (Who knows?) Italian itself offers a wealth of linguistic options that make me smile (mi fanno sorridere). In English, for instance, you smile at someone or something. In Italian one sorride ad una ragazza (smiles at a girl) but sorride per una facezia (smiles at a joke).

Una  faccia sorridente (smiling face) isn’t necessarily una cosa da ridere (laughing matter). You can smile bitterly (sorridere amaramente) or look at someone with a pitying smile (sorriso di pietà), a sneer (sorriso beffardo) or a smirk (sorriso affettato). If you’re hiding a secret smile, you would ridere sotto i baffi (laugh under your moustache). If you’re truly amused, you might burst out laughing (scoppiare dal ridere) or even split your side laughing (sbellicarsi dalle risa).

Here is something to make anyone smile: an Italian translation of the anthem of all who keep smiling through their tears.

Smile when your heart is aching

Smile even though it's breaking

When there are clouds in the sky

If you smile through your fear and sorrows

You see the sun come shining through for you

Light up your face with gladness

Hide any trace of sadness

Although our tears be ever so near

That's the time you must keep on trying

Smile, what's the use of crying?

You'll find life is still worth while

If you just smile.