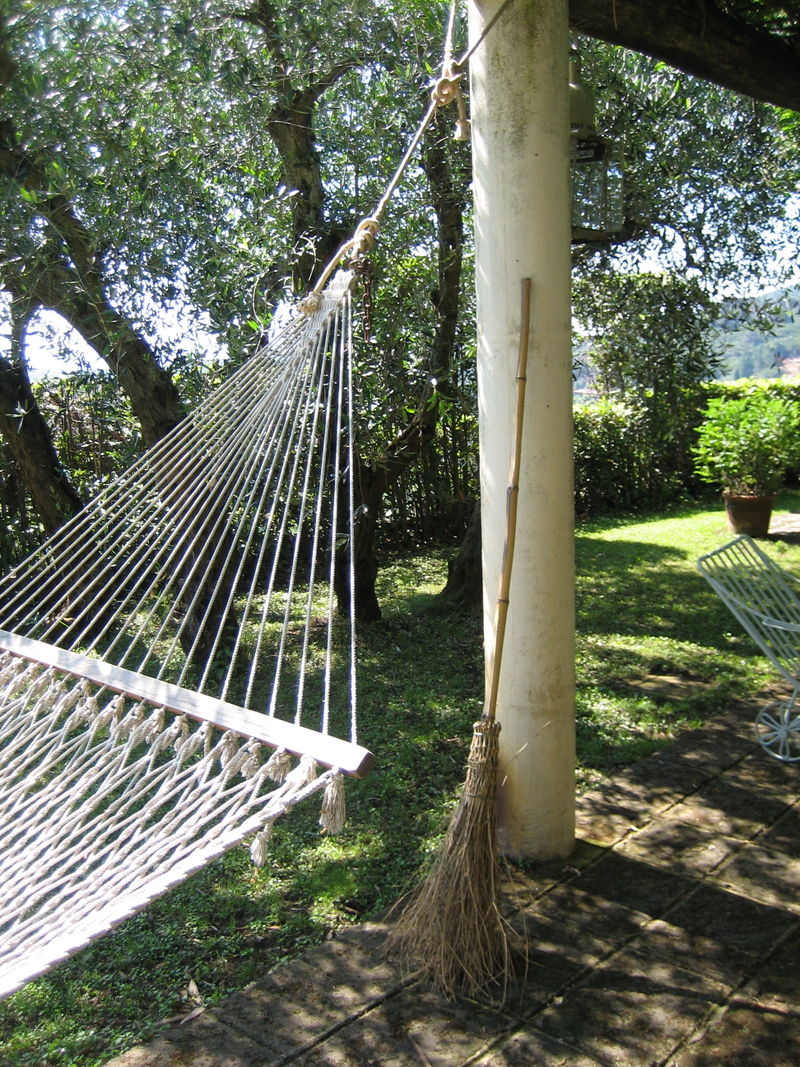 At one of my first formal Italian classes, I entered the room with an empty paper coffee cup in hand.

“Sì,” I
responded, certain that I wanted whatever this spray of sibilant
syllables offered. Then I tracked her outstretched arm as she pointed
to the waste basket in the corner.

“Trash,” she said in English.

“Such a lovely word for such an ugly thing!” I exclaimed.

How old? Like many of the words in Italian’s linguistic base—its 10,000 most-used words—spazzare
(to sweep) dates back to the fourteenth century, when it appeared in
the writings of Italian’s first great narrative stylist, Giovanni
Boccaccio (1313-1375). With such a literary pedigree, it's not
surprising that trash sounds beautiful in Italian—especially when
you’re sweeping it with a rustic handmade twig broom like this one I
photographed at the villa we're renting in Tuscany.

Over the centuries spazzatura sprouted offshoots such as spazzatina, (dusting), spazzola (brush) and spazzolaio (brushmaker). More recent derivatives include spazzamine (mine-sweeper), spazzaneve (snow plough) and my favorite, spazzolino da denti, a toothbrush. But although the word remains the same, spazzatura has taken on forms unimaginable seven centuries ago.

Months
ago, when Naples ran out of places to dump or incinerate its garbage,
trash piled up in huge, stinking mounds. On the Italian television
news, alarmed citizens protested. Health officials sounded warnings.
Politicians ranted in outrage. I couldn’t understand much of what the
native Neapolitans were saying in their lilting dialect, but one
familiar word echoed through every news report: spazzatura.

“Amore mio, puoi portare fuori la spazzatura?” – “My love, can you take out the garbage?” (one of the most useful questions I ever learned from a language website)

This medieval word  inspired a catchy contemporary song, “La Spazzatura,” by Marco Saltatempo. Could lyrics like “Throw out the trash, the trash stinks” (“Butta la spazzatura, puzza la spazzatura”) sound so appealing in any other language?