Summer in Italian: A Season in the Sun 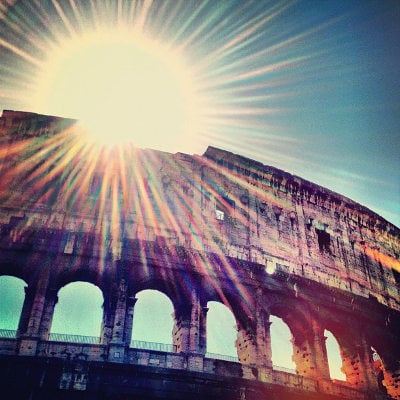 Italians sometimes describe themselves as “solari” (sunny, cheerful, radiant). Il sole italiano (the Italian sun) certainly has inspired il culto del sole (sun worship) throughout the peninsula. Could anyone other than Italians have written a love song to the sun?

Giovanni Capurro, a writer in Naples, and Eduardo di Capua, a posteggiatore (Neapolitan for a party or restaurant singer), composed “‘O sole mio” (“My Sun”) in 1898 and sold all rights to a music publisher for 25 lire. Here is the first verse:

“What a beautiful thing is a sunny day.

The air is serene after a storm.

The air is so fresh that it already feels like a celebration.

What a beautiful thing is a sunny day!”

The sun claims a special season every summer: the days of il solleone (the big sun), the period from mid-July to mid-August, when the sun falls under the zodiac sign of Leo. At the time of the Roman empire, Sirius (the dog star) rose and set with the sun, and people thought its red glow contributed to the summer heat. They used the term canicola (from cane for dog) to describe the “dog days” at the height of summer.

“Come picchia il sole!” (How the sun beats down!), people complain during these long giorni soleggiati (sunny days). If we’re on vacation, I am happy not to have to rise with the sun (alzarsi col sole) or get up at sunrise (allo spuntar del sole). When a ray of sunshine (raggio di sole) creeps through our shutters to wake me, it reminds me of a literary description of being in jail: vedere il sole a scacchi (to see the sun in squares). “Il sole è alto,” I announce to my family. The sun is up –and waiting for us.

“Che sole!“ (What a fierce sun!) I think at mid-day as I blink at the brightness of the sunlight (luce del sole). If I want to sunbathe (esporsi al sole), I look for a sunny spot (un luogo soleggiato) to take the sun (prendere il sole). While in the sun (al sole), I try to protect my eyes with sunglasses (occhiali da sole). To avoid sunstroke (un colpo di sole), I may duck under a beach umbrella (ombrellone). I always remember sunscreen (crema solare) to prevent a sunburn (una scottatura).

Even when Italians aren’t basking in the sun(crogiolarsi al sole), a gleam of sunshine (il bagliore del sole) brightens their conversations. A striking young woman is beautiful as the sun (bella come il sole). A fact may be clear as the sun (chiaro come il sole). Someone who acts openly without hiding anything does so in the light of the sun (alla luce del sole). And, of course, there’s nothing new under the sun (nulla di nuovo sotto il sole), including the fact that il sole sorge — e sorge per tutti (the sun rises — and rises for everyone).