Summer in Italian: The Sweetness of Doing Nothing 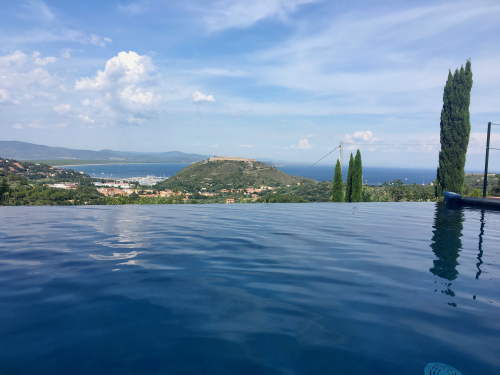 This guest blog by  an Italophile in Des Moines is one of the most popular posts I’ve ever run. I’m re-publishing it to savor as the end of summer approaches.   Buona lettura!  (Enjoy the read!)

A few years ago while I was sitting on a beach in Southern Italy, I noticed a man kicking a soccer ball down the shoreline. He kicked it a few feet at a time, nothing too strenuous, just a nice bit of play in the middle of a glorious sunny afternoon. It struck me as unusual that this man would take the time to do this. It was as if he had all the time in the world at his disposal and the only thing he cared about at that moment was kicking that soccer ball.

The explanation for his behaviour then occurred to me. He had developed the abilty to practice l’arte di non fare niente. This is an Italian expression which translates as the art of doing nothing. Ah, dolce far niente! It is also known as the sweetness of doing nothing. Now let’s ponder this for a moment or two.

Such poetic phrases, aren’t they? In the United States we refer to this as killing time, a crude and brutal term that implies wastefulness. Yes, we are a nation of overachievers and multi-taskers. Now don’t get me wrong, I can multi- task with the best of them, but every so often I think of that man, kicking that soccer ball, and I yearn for a little down time of my own.

For some it may be reached by drinking wine on the deck while listening to the cicadas or by lingering over several cups of coffee with an old friend. No box wine or instant coffee will do. For some it may be accomplished by sipping tea by the fire, with a cat softly purring nearby, or by watching a baby sleep. For others the art is practiced by taking the time to share a story or two with the locals at the market. People-watching at the piazza, a swing at the park, and making animal creatures from play dough would all qualify.

I know what you are thinking. None of the above mentioned things are nothing, and they are indeed something. L’arte di non fare niente implies spontaneity and doing a thing for nothing more than the pleasure of doing it. The man on the beach was not out to refine his technique, burn carbs, or impress the ladies. He was kicking that ball for no other reason that the sheer enjoyment of his solitary movement along the water’s edge, and that, my friends, is a beautiful thing.

Dianne Hales is the author of LA BELLA LINGUA: My Love Affair with Italian, the World’s Most Enchanting Language; LA PASSIONE: How Italy Seduced the World; MONA LISA: A Life Discovered; and  “A” Is for Amore,  an e-book you can download for free.