The Changing Family in the Italian Language 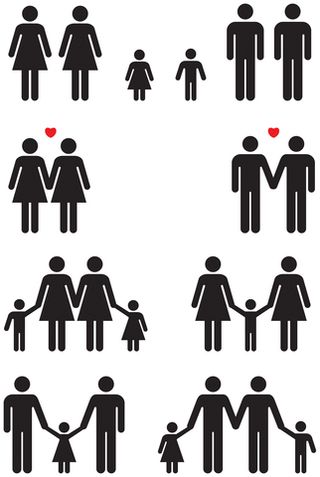 In Italy, as elsewhere, la famiglia is changing—and language is changing to keep up with it. The word famiglia stems from the Latin familia, originally defined as “un gruppo di servi e schiavi” (a group of servants and slaves) owned by a pater familias (family father). This unit typically included a wife and children (moglie e figli), who also legally belonged to the capo (head) of the household.

Over time the family was redefined as un gruppo di persone (a group of people) affiliated by legami consanguinei o legali (blood relationships or legal ties) such as il matrimonio (matriomony), l'adozione (adoption) or la discendenza da progenitori comuni (descent from common ancestors). The most honored is la Sacra Famiglia (the Sacred Family) of Jesus, Mary, and Joseph.

*nucleare (nuclear) — made up of one unità coniugale (conjugal unit)

*coniugale –- composed of parents (genitori) and their children (figli)

*monogenitoriale –- a single parent family, consisting of one parent and his or her children, generati o adottati (biological or adopted)

*omogenitoriale –- a family composed of two parents del medesimo sesso (of the same sex) and their children.

As Italian leaders have taken up the issue of same sex marriage and adoption of a child from a partner’s previous relationship, a new anglismo (English expression) has  crept into the discussion: “stepchild adoption.” Incipit, a special committee formed by L’Accademia della Crusca, the bastion of the Italian language, to esaminare e valutare neologismi e forestierismi (examine and evaluate neologisms and foreign words), has objected to yet another invasion of la bella lingua.

The literal translation of stepchild adoption in Italian would be adozione del figlio del partner. This phrase, the linguistic experts concede, is wordier and relies on the English “partner,” which carries somewhat different meanings in Italian. My dictionary offers compagno and compagna for husband and wife, but socio accomandate for “sleeping partner.”

The Italian figliastro (stepson), in the committee’s view, "non si adatta certo ai tempi nostri e alle nostre leggi”(does not fit our times and our laws.). Another argument against “stepchild adoption” is that many Italians—including the senators debating the controversial topic—confront qualche impaccio di pronuncia (some awkwardness in its pronunciation). If national leaders find it difficult, che accadrà ai comuni cittadini (what will happen to ordinary citizens)?

As an alternative, the distinguished panel has suggested un neologismo tutto italiano (a completely Italian new word) for stepchild: configlio (stepson) or configlia (stepdaughter). As people around the world find new ways to form a family (mettere su famiglia), more linguistic “stepchildren” are sure to make their way into daily language—and life. Benvenuti a questi configli linguistici! (Welcome to these linguistic stepchildren!)

Capofamiglia — head of the house