A Season of Celebrations in the Italian Language 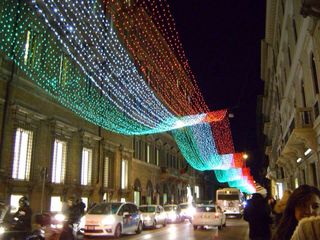 In ancient times the Romans celebrated Saturnalia, a winter solstice festival, with religious rites and drunken feasts. The early Christian church decreed December 25 — then the feast of the sun god Mithras — as the birthday of Gesù bambino (Baby Jesus), the “true light” who came to dispel darkness in the world.

Modern Italian holidays blend religious and pagan festivities that create un’atmosfera natalizia that lasts from weeks before to weeks after December 25. Children in Italy, as elsewhere, often count down the days with a calendario dell’avvento (advent calendar).

Although you can find more extravagant decorations (decorazioni) in the United States, Christmas lights (illuminazioni natalizie) and alberi di Natale (Christmas trees) are becoming more popular in Italy. In Torino lighting artists illuminate more than twelve miles of streets and squares. An 875-yard-high Christmas tree—reportedly the world’s tallest–with 450 lights stands near the top of Monte Ingino, above Gubbio in Umbria. Its bright star can be seen from as far away as Perugia.

Here are the key dates in a season of celebrations:

*December 6: La festa di San Nicola, patron saint of shepherds and of Bari–and the inspiration for the modern-day "Santa Claus."

*December 8: La festa dell'Immacolata, the feast of the Immaculate Conception, a Catholic holy day honoring Mary, the virgin mother of Jesus. In Rome the Pope comes to the Piazza di Spagna to drop a garland of flowers around the statue of the Madonna. (Since she stands atop a high column, firemen on ladders do the actual placement.)

*January 1: Il Capodanno, literally the top of the year.

*January 6: L’Epifania (Epiphany), which marks the arrival of the Re Magi, the three wise men who carried gifts from afar and of La  Befana, bearer of gifts for good girls and boys.

Stay tuned for more on these celebrations in the coming weeks!

Dianne Hales is the author of LA BELLA LINGUA: My Love Affair with Italian, the World's Most Enchanting Language and MONA LISA: A