The Enduring Passion of Sophia Loren 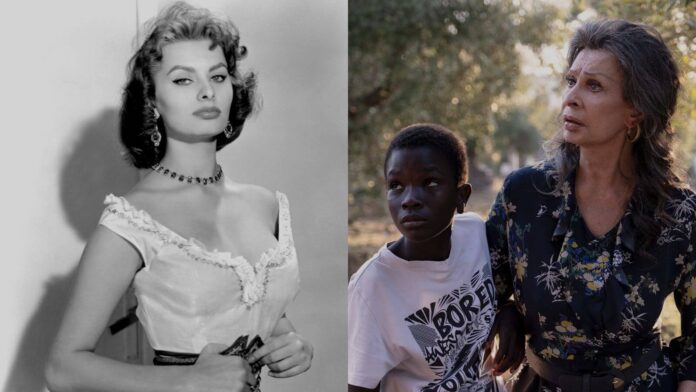 The Life Ahead, a Netflix movie starring Sophia Loren and directed by her son Edoardo Ponti, marks the return to the screen of a woman with an unquenchable passion for life—and for acting.

Born near Naples in 1934, Sofia Scicolone grew up amid Allied bombings that left a piece of shrapnel embedded in her chin. When the local theater reopened after the war, the twig-thin girl—taunted as “Sofia Stuzzicadente” (Sofie Toothpick)–entered what she calls its “hallowed darkness” and discovered an unexpected passion: “I was suffused with the feeling that I was put on earth to act, to express myself, to let out whatever feelings I had inside.”

By fifteen, the scraggly duckling had blossomed into a tall, full-figured knockout. At her mother’s urging, Sofia began entering beauty pageants—in an evening gown sewn from the pink living room drapes. Although she never won the top prize, directors began casting the  brown-eyed maggiorata (as curvaceous Italian starlets were called) in minor roles.

Cameramen complained that Sofia was impossible to photograph—nose too big, gap between front teeth, odd angles on her face. A short, bald man twenty-two years her senior saw in the sixteen-year-old  not a mere actress but “an artist, like a singer who either has a God-given voice or hasn’t.” His name was Carlo Ponti; he changed hers to Sophia Loren. With his smarts and her beauty and talent, the Neapolitan waif would become the biggest star Italy ever produced.

Winning a five-film contract in the United States, Sophia costarred with Hollywood’s leading men. Newsweek hailed her as “a Mount Vesuvius.” Cary Grant was so smitten that he swore to leave his wife to marry her. As Sophia later admitted, she was tempted, but decided to honor her commitment, personal as well as professional, to Carlo Ponti.

“I am not a sexy pot,” Sophia once told reporters. She proved it with a performance of seething passion in La ciociara (with the English title of Two Women), a brutal tale of the rape of a mother  and her adolescent daughter as they flee war-torn Rome.  Revealing her full potential as a true cinematic “artist,” Sophia won an honor no Italian had ever achieved: the Oscar for Best Actress.

Sophia’s offscreen love story dragged on for decades. After separating from his wife, Ponti obtained a Mexican divorce and married Sophia by proxy. The Catholic Church and Italy’s government never recognized the marriage. The couple moved to France and eventually acquired French citizenship, which allowed them to wed.

When asked, at age seventy, what she liked most about acting, Sophia replied, “I’m an actress. It’s my passion. I’ve always lived for acting… Every picture I do, I feel it is my first picture in my career.” Her feelings haven’t faded. “I love cinema so much,” she said in a recent interview.  “I want to keep doing it forever.”

Critics have hailed her performance in The Life Ahead as proof that Sophia’s “starpower” hasn’t dimmed.  Long may she glow!