The Fatal Passions of Julius Caesar 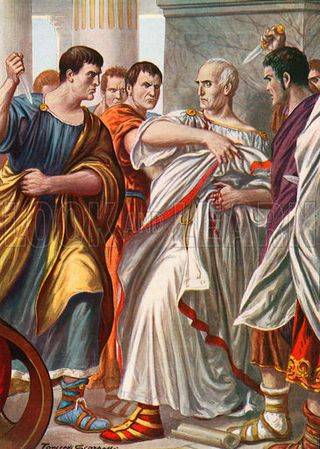 “Veni, vidi, vici” (I came, I saw, I conquered). These three Latin words summarize the passions of the consummate Roman leader: Gaius Julius Caesar (100–44 BC), who lived to conquer—by sword, word, or seduction.

By age thirty, Caesar had proven himself a fearless commander, a gifted orator, and a dutiful husband to the impeccably virtuous Cornelia. When she died in childbirth, the fortune of his second wife paved Caesar’s way up the ladder of political offices. Charm and charisma helped him woo and win scores of lovers, many married to his colleagues and enemies. As historian Adrian Goldsworthy observed, the “sheer scale of his activities stood out in Roman society, which at this time did not lack adulterers or rakes.”

Caesar’s military conquests carved out vast new territories for Rome, including most of modern France, Switzerland, Belgium, southern Holland, western Germany, and the British Isles. Wary of Caesar’s growing power and popularity, in 49 B.C. the Senate issued an ultimatum demanding surrender of his command. Instead Caesar broke a long-standing tenet of Roman law and led one of his legions—some five thousand men—across the Rubicon River into Italy. His blitzkrieg swept through Italy, with town after town opening its gates in surrender.

In two months, with almost no bloodshed, Caesar gained full control of Rome’s military and treasury. He initiated a program of social and governmental reforms, introduced the twelve-month “Julian” calendar, centralized the Republic’s bureaucracy, and won designation as “dictator in perpetuity.” With each new role and responsibility, the brilliant tactician and unscrupulous politician evolved into a more astute statesman and governor.

When Caesar pursued his remaining enemies to Egypt, the warrior quickly turned into a lover—this time of twenty-two-year-old Queen Cleopatra. Historians still debate who seduced whom. Although Caesar would never marry Cleopatra, he presented his Egyptian prize to Rome, where he scandalized its residents by placing a statue of her next to Venus in the goddess’s temple. Caesar’s foes feared that the overreaching ruler would soon declare himself emperor.

On March 15, 44 B.C., Caesar made his way to a meeting of the Senate in the Theatre of Pompey. As many as 60 conspirators gathered around the dictator and pulled out their knives.  At first, Caesar attempted to defend himself.  But when Brutus , the son of his former mistress, raised his blade to strike, Caesar cried out “E tu, Brute” (or so Shakespeare has us believe) and gave up the fight.

The Italian language pays tribute to the fallen emperor with a word that exists in no other language: cesaricidio (the murder of Caesar). “Caesar” became the title of Roman emperors down to Hadrian in the second century A.D. and served as the root for  German’s “Kaiser” and Russian’s “czar.”  According to one of my etymological dictionaries, “Caesar” also inspired an American slang word, used about a century ago  for a sheriff:  Great Seizer.