The Gate to Paradise in the Italian Language 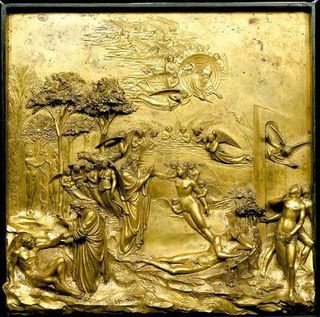 The Gate of Paradise

“Eccola finalmente!”(Here it is at last!) boomed an Italian headline. The masterpiece (capolavoro) of Lorenzo Ghiberti “torna a rifulgere di spettacolare splendore” (returns to shine in spectacular splendor).

After a restoration that lasted 27 years (un restauro durato 27 anni), the gate of bronze and gold (bronzo ed oro) of the Baptistery (Battistero) of Firenze once more is visible to the public (visibile al pubblico) in the Museo dell’Opera del Duomo (Museum of the Works of the Cathedral).

It took Ghiberti 27 years—from 1425 to 1452 — to create the door, cast in bronze in a single piece (gettata in bronzo in un unico pezzo) and weighing nearly nine tons (quasi nove tonnellate). Embedded in the casing are ten large panels (dieci grandi pannelli) with stories of the Bible (storie delle Bibbia), plus dozens of heads and figures of prophets and sibyls (profeti e sibille).

For centuries the door survived constant touching (continui toccamenti) and periodic drastic “cleanings”(drastiche “puliture” periodiche), including one that covered its gold surface with a “protective” dark paint (vernice scura “protettiva”)
To safeguard the gate from the fury of the second World War (infuriare della seconda guerra mondiale), it was removed from its housing and sheltered under a railway tunnel (sotto una galleria ferroviaria). The gate was restored and replaced in 1946.

The greatest devastation came during the flood (alluvione) of November, 1966, when a terrible wave (una spaventosa ondata) slammed violently against the door several times. Five panels separated from the frame (si staccarono dal telaio) and fell into the mud (caddero nella melma).

By the end of the 1970s, the door had suffered the impact of a new, invisible enemy (nuovo, invisibile nemico): air pollution (l’inquinamento atmosferico).  In 1985 work began to remove and restore (staccare e restaurare) the door, and in 1990 city officials replaced the entrance to the the Baptistry with a copy.

Over more than a quarter-century, restorers at the Opificio delle Pietre Dure (which literally translates as the Workshop of Semi-precious Stones,) used many new technologies (molte nuove tecnologie) to bring the door  back to its original glory. Funding of an estimated 10 million euro came from the Ministry of Culture (Ministero dei Beni Culturali), the American-based Friends of Florence, and private donors from around the world.

Now once again visitors can understand what Michelangelo meant when he exclaimed at the sight of Ghiberti’s panels: “Sono tanto belle che starebbero bene alle porte del Paradiso!” (They are so beautiful that they would well be the gates of Paradise.)

You don't need to understand Italian to appreciate the beauty of the unveiling of the doors: