The Geology of Italian Passion 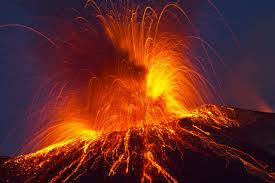 La passione italiana dates back to a time before time when a geologic frenzy carved a boot in the middle of the Mediterranean. Convulsing and colliding, tectonic plates thrust an ancient seabed so high that tiny crustaceans were trapped and fossilized in the Italian Alps. Lava seething within the earth boiled and bubbled to form a chain of volcanic cones stretching from central Italy to what would become the island of Sicily.

Even today the Italian earth trembles. The Apennines, running like a spine through the peninsula, still undulate, sometimes with devastating consequences. Europe’s only active volcanoes—Vesuvius, Stromboli, and Etna—rumble and spew.

Eons of natural sculpting formed a countryside Renaissance artists considered the most magnificent of masterpieces, a mosaic of wind-blasted rocks, hills pleated with valleys, and mountains cresting into boundless blue. In the splendid Val d’Orcia, a plaque pays tribute to Italy’s first artists: the contadini (farmworkers) who tilled fields, terraced hills, and left behind rows of slender green cypresses climbing to crenellated towers silhouetted like paper cutouts pasted on an azure sky. 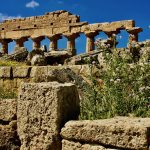 The symbiosis between the land and its people forms a bond as strong as blood—and older than Italy itself. At Selinunte, an ancient Greek settlement on Sicily’s western coast, my guide—a tiny, pony-tailed dynamo named Pina—presses my palm against the sun-warmed column of a temple built five hundred years before the birth of Christ.

“You can feel the passion of the people who built this place,” she says. “It’s in the stones!” In Florence, a street artist tells me to breathe deeply and inhale the heady oxygen that stimulated the genius of Renaissance masters. A Venetian glassblower talks of the water flowing like blood through the veins of an improbable city that seems spun out of fantasy. An olive grower in Campania gently sifts a fistful of soil through his fingers as he describes the land that nurtured the souls of his forefathers.

On a shuttle in Chianti, our driver suddenly pulls to the side of the road. I step out to view a titanic sunset not so much painted as carved, great cloud masses of deep rose, purple, and mauve, coupling and uncoupling as golden rays silhouette their shoulders.

“Sentite!” he commands, exhorting us not just to look but to take in this heavenly spectacle with every sense. And I do, lingering before this twilight tango until the darkness deepens into night.

“What mysterious emptiness in their souls is filled by merely standing on Italian soil?” the Italian writer Luigi Barzini mused in his classic The Italians. Perhaps the answer lies, at least in part, in the skies above and the earth below.