The Italian Language at a Coffee Bar 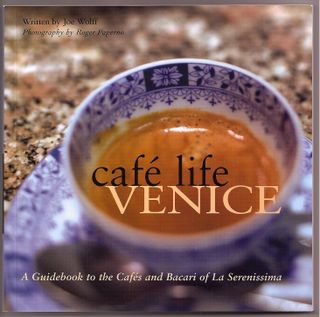 The
author of today's guest blog is an expert in Italian coffee and cafés:
Joe Wolff, author of three delightful guides to both: Café Life Venice, Café Life Rome and Café Life Florence.

The Italians are good at some things: beautiful clothes, beautiful
woman, really good coffee, and efficient bars. (They’re terrible at
plumbing.) The word caffé refers to both coffee and the
place you drink it. It can also be synonymous with bar (an English word
borrowed by the Italians.)

An Italian never goes to a bar in Italy and asks for an espresso. Instead it’s “un caffé, per favore.” This is one shot of espresso in a tiny cup, usually corto (short), with a lovely head of light brown crema (or schiuma). Other options include:

*caffè corretto — coffee "corrected" with a shot of liquor

*cappuccino — espresso infused with steamed milk, drunk  only in the morning

The Romani usually slam down their caffé standing
at the counter (the speed is legendary, 30-90 seconds). There’s a story
about a famous Roman politician who comes into a bar near his office at
the same time every day. When the barista sees him approach, he draws the caffé. The politician enters ceremoniously with his right hand in his pocket and the barista slides the cup to his left side. One gulp. He leaves.

The Fiorentini, on the other hand, say you need three things for a good caffé: it has to be pagato, caldo e berlo seduto (paid for, hot, and enjoyed while seated). The Veneziani skip coffee and drink wine — even in the morning.

Where did the words coffee, café, or caffé originate? This is
a little cloudy. According to one coffee legend, an Arab shepherd in
Ethiopia, tending his goats, was the first person to discover coffee.
Actually, the goats were first. During the night, he noticed they acted
strangely, jumping and leaping around—even the older ones. Upon
investigation, he saw they had been eating the red berries of a local
shrub. He tried the berries himself, and the rest is coffee history.

The Arabs called the drink qahwah, classic Arabic suggesting something stimulating and exciting. The Turks transformed this to quahve—and
around 1450 the first coffee shops opened in Constantinople. Another
theory says that the word simply came from the province in Ethiopia
where the coffee tree was first discovered—Kaffa.

Venetian traders brought coffee beans to Euorpe in the early 1600s, and quahve evolved into coffee and caffé.

When going into an Italian bar, you should definitely ask for un caffé (not espresso) — as a tourist, it will give you maximum cool.

Allora, andiamo al bar a prendere un caffé. (Well then, let’s go to a bar and get a coffee.)

Here are some phrases you'll need in any coffee bar:

You can hear these phrases on the Living Language blog.

← Who knows what in the Italian language? Does Your Computer Speak the Italian Language? →
FOLLOW BY RSS