The Italian Language on a New York Subway 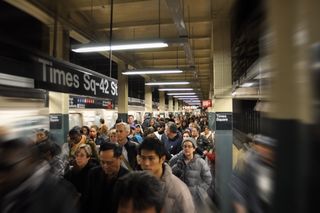 As a graduate student at Columbia Journalism School, I spent plenty of time reading other people’s books on the subway, so I was particularly delighted when Peter V., a New Yorker, wrote to share this anecdote about La Bella Lingua and a chance meeting on a train from Brooklyn.

"I was taking the subway (la metropolitana) — a very crowded (molto affollato) number 2 express — from Brooklyn to Penn Station in Manhattan the other day (l’altro giorno). The passengers were packed in like sardines. I had a seat (mi sono seduto) and had my nose buried in (ero immerso nella lettura) La Bella Lingua.

A very attractive woman (una donna molto bella) next to me said that she never spoke to strangers (estranei) but had to make an exception since the coincidence (la coincidenza) was so incredible. She had also read La Bella Lingua and had liked it so much that she bought a second copy (una seconda copia) to give to her mother. We chatted for a few minutes about how much we enjoyed (abbiamo apprezzato) the book.

La donna did not speak Italian. I told her that I speak a little bit (ne parlo un pochino) and that every time I visit Italy, I bone up (lo ripasso) by listening to tapes and studying grammar books. I also told her about how my parents spoke Italian to each other (parlavano in italiano tra loro) when I was growing up (quando ero piccolo).

The woman said that it was remarkable (straordinario) that two people could by sheer coincidence (per pura coincidenza) be sitting next to each other on a subway in New York City and both be fans of a book on the subject of la lingua italiana.

I was so surprised by the conversation (la conversazione) that I never thought to ask la bella donna her name. At any rate, my stop came soon, and I had to get off (dovevo scendere)."

If you read this, bella donna di Brooklyn, grazie per i complimenti, and let us know (facci sapere) how to find you (come trovarti). I will send you (ti manderò) a signed frontispiece.

per caso –- by chance

per puro caso –- by pure chance

troppe coincidenze –- too many coincidences

Che coincidenza! — What a coincidence!