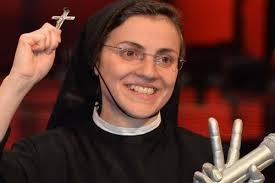 Last Spring a young woman belted out Alicia Keys’ “No One” at a blind audition for Italy’s The Voice. Judges and viewers sat with open mouths (a bocca aperta) when they realized that the spirited singer was an Ursuline nun dressed in a plain religious habit (abito), sensible black shoes (scarpe nere) and a crucifix (crocifisso) around her neck.

Sister Cristina, a devotee of the Madonna and a fan of "the other Madonna," says she chose the tune “with no desire to provoke or shock” (senza nessuna volontà di provocare o di scandalizzare). Reading the lyrics, she realized that it is a song  about the capacity of love to make people new (una canzone sulla capacità dell’amore di fare nuove le persone) and redeem them from their past. 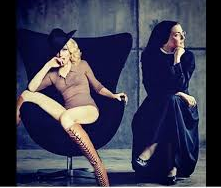 Sister Cristina interpreted the lyric “touched for the very first time” as “ il tocco di Dio” (the touch of God) when he called her to una vita nuova (a new life), restoring to her la purezza, la dignità di essere Figlia Amata da Lui (the purity, the dignity of being His Beloved Daughter).

Like Madonna’s thirty years ago, Sister Cristina's video of “Just Like a Virgin” is set in Venice. A few of the suggestive lines have been omitted, and the racy number now sounds, as Sister Cristina puts it, more like a ballata romantica (romantic ballad) or una preghiera laica (a secular prayer) than un brano pop (a pop song). A reviewer described it as “una sorta di inno religioso” (a sort of religious anthem).

The unlikely singing star with the celestial voice (con la voce celestiale) was born in Sicily in 1988. Although she originally came to Rome to prepare for a theatrical career, Cristina became a novice (novizia) in 2009 and worked for two years with poor children (ragazzi poveri) in Brazil. Returning to Rome, she first gained recognition in 2013 when she won a Christian singing contest (concorso canoro).

Because Sister Cristina has taken a vow of poverty (voto di povertà), proceeds from the recording are going to help projects in the congregation. Other songs on the disc include Pink’s “Try,” Coldplay’s “Fix You” and Cyndi Lauper’s “True Colors.”

L’unico brano (the only song) in Italian is “L’amore vincerà’” (Love will win). Here are the words to the refrain (ritornello):

(Life will surprise us with its design / project that becomes masterpiece / It’s enough to have faith and then / Love will win.) Sister Cristina might well be singing about her own life story.

For more on “Il pop-rock di Suor Cristina” in Italian, with a translation of key words into English and French, click here for the latest from Paola Gagliano’s always-enlightening “Italyamonews.”

← ITALY Magazine's "Blogger of the Week" The Feast of Santa Lucia: A Different Italian Christmas →
FOLLOW BY RSS