The Latest Fashion in the Italian Language 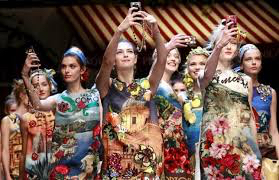 I’ve never been a fashionista or a modaiola (trendy fashion victim), but I was enchanted by le immagini (the images) from Dolce & Gabbana’s 2016 collezione primavera-estate (spring-summer collection) in Milan, Italy’s capitale della moda (fashion capital).

With the theme “Italia is love,” Dolce & Gabbana created what an American reporter described as “an unabashed celebration of what makes Italy a beacon for pleasure lovers the world over” in the form of la prima vera selfie-sfilata della storia (the first true selfie runway show in history).

The designers were inspired by glamorous vacanze (holidays) during the fifties and sixties in costiera amalfitana o sulla riviera ligure (on the Amalfi coast or the Ligurian Riviera). Ricamo (embroidery) appeared on everything from Capri calzoni (pants) to flowing caftans. Images such as the torre pendente (leaning tower) of Pisa and Michelangelo’s David graced brightly colored gonne (skirts) and vestiti (dresses).

Armate di smartphone (armed with smart phones), indossatrici (models) scattavano selfie all’impazzata (snapped selfies wildly) in passerella (on the catwalk) as classic recordings like "An Evening in Rome" and "That’s Amore" played. Hundreds of spettatori (spectators) uploaded images to Instagram and Twitter with l’hashtag #DGselfie.The result, according to the Italian press, was caos social (social chaos) that forever changed le regole del gioco (the rules of the game).

Italian fashion has never played by the rules. Rather than simply covering the body, Italian styles express, attract, amuse, define, distinguish, proclaim, protect, project, seduce and stimulate—and they always have.

Ancient Rome’s sybaritic rulers installed silk (seta) factories in their imperial palaces to manufacture the delicate fabric—forbidden to commoners—for their togas. In the Middle Ages, Florence’s renowned weavers and dyers used secret techniques to produce cloth (tessuto) in rainbow hues and luxurious patterns that clothed the courts and clerics of Europe.

La moda italiana (Italian fashion) as we know it today emerged from the bleak aftermath of World War II. Milan, an industrial center close to the factories producing le materie prime (raw materials) of fashion, emerged as the capital of alta moda (high fashion or haute couture). By 1961 Life magazine declared that Italian design had “changed the way the world looks—the cars, buildings, furniture, and, most universally, the women.”

Italians today take pride in being ben vestiti (well-dressed)—which can mean vestire alla moda (wearing fashionable clothes), vestire a festa (wearing one’s Sunday’s best), vestire splendidamente (dressing to kill) or vestire per fare colpo (dressing to impress). Now, thanks to Dolce & Gabbana, fashion is looking at itself in a new way– and sharing what it sees with a world more connected than ever (un mondo più connesso che mai).

Sfilare sulla passerella –– to walk up and down the catwalk

Andare di moda –- to be in fashion, trendy