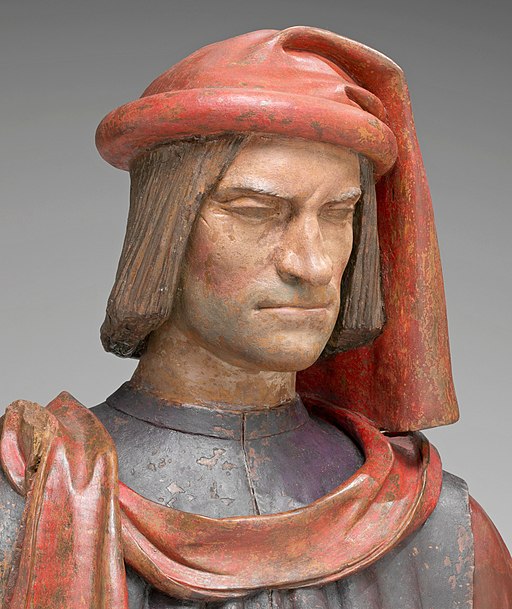 The Medici, the dynasty that governed Renaissance Florence, blazed into the 21st century in a three-part series, now streaming on Netflix.  While many dispute its historical accuracy, the lavish production captures the seize-the-day spirit of the age.  Certainly Daniel Sharman, the handsome actor cast as the most magnificent Medici, bears little resemblance to the supremely but seductively ugly Lorenzo (1449-1492), known for his massive nose and jutting chin. Over the course of more than twenty years, Lorenzo ruled the Florentine city-state, negotiated a delicate European peace, managed the family business, mingled easily with philosophers and peasants, and was hailed throughout Europe as the noblest Italian of his time.

One of the  greatest passions of this prince-in-all-but-name was the Italian language. Superbly educated, Lorenzo could read and write Latin and Greek. However, he chose to speak only in the simple vernacular Italian that he had learned as a child. No other language was allowed at his table, where artists such as the young Michelangelo joined in the conversation. “At Lorenzo’s court,” a historian noted, Italian “received those finishing touches that made it the richest, most refined, and sweetest of tongues, not only in all of Italy, but—in those days—in the whole world.”

Lorenzo contended that Italian, an everyday language spoken by the uneducated masses, was as good as Latin, if not better, for writing “high” literature–a rather daring declaration in the heydey of humanism, which lauded the ancient tongues.  Just as the “Florentine empire” dominated the peninsula, Lorenzo contended, so should the language perfected by Dante and Petrarch.

Under Lorenzo’s rule, Florence became a literary laboratory where writers experimented with all sorts of genres. Lorenzo himself composed love poems, lusty ballads, and canti carnascialeschi (festive songs), some of which the censors of the Inquisition would later decry as scandalously obscene. His compositions extolled the delights of youth, women, falconry, the tranquil Tuscan countryside, and its rustic inhabitants.

“Who would be happy, let him be,” Lorenzo wrote in this most famous verse. “Of tomorrow who can say?” (“Chi vuol esser lieto sia, del doman non v’è certezza.”) With life-loving zest, the patrician poet entertained the city with masquerades, revels, pageants, and processions. During his tenure, carnascialismo (carnival merriment) rose almost to the point of art. “If ever history could be happy, it was then,” wrote one commentator.

History turned dark in April, 1478, with the assassination of Lorenzo’s brother Giuliano. The attempted coup and its many ramifications challenged Lorenzo’s leadership. In the years that followed, the Medici’s vast financial enterprises foundered as a result of mismanagement and bad loans.

In his early 40s, Lorenzo began to suffer complications of gout, the disease that had killed his father. As a contemporary reported, a slow fever attacked“not only the arteries and veins, but the limbs, intestines, nerves, bone, and marrow.” Doctors brewed what they hoped would be a cure: a concoction of pulverized pearls and other precious stones that may well have hastened his death in 1492 at age 43.

More than five centuries later, Lorenzo’s legacy still shines, not only in Florence’s unparalleled works of art and architecture, but in the magnificent language that he championed.