The Most Famous Obscenity in the Italian Language 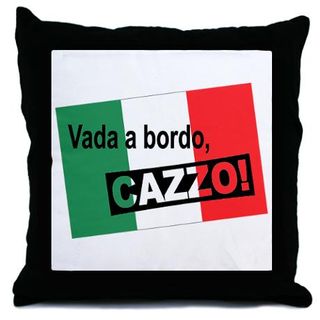 It has become the oscenità (obscenity) heard round the world. After the shipwreck of a cruise liner (nave da crociera) off the Tuscan coast, an officer of the Italian Coast Guard, angered by the captain’s abbandono (abandoning) of his ship, bluntly ordered him to go back on board. His exact words were: “Vada a bordo, cazzo!”

Reporters and bloggers have translated this phrase into English in a variety of ways, from a mild “Go on board, damn it!” to “Go on board, for %&*#’s sake!” to a much stronger, “Get the *&#!= back on board!” Italians are interpreting the slogan as an impassioned cry to all citizens to stop thinking only about themselves, to face harsh realities and to do what’s best for their country. The phrase has gone viral (si è diffusa viralmente) and appears on banners, tee-shirts, aprons and throw pillows (above).

Obscenities like cazzo “were among the oldest, if not the oldest, words in human history,” Vito Tartamella, author of Parolacce, told me when I interviewed him in Milan as part of my research for LA BELLA LINGUA. ”Civilization couldn’t exist without them. Instead of throwing rocks at each other, men learned to hurl insults and vulgarities.”

“Do Italians curse more than other people?” I asked.

“They curse differently,” said Tartamella, noting that, unlike French, German, or English speakers, Italians express powerful emotions like anger, disgust, surprise and horror with sexual obscenities rather than scatalogical ones.

Cazzo, which dates back to about 1300, may stem from a dialect word for the maschio dell’oca (male goose), slang for the membro virile (masculine member or organ). Other linguists have traced it to an ancient word for "ladle" and to nautical terms associated with the lusty spirit of sailors long at sea.

I’ve heard Italians use it as an expression of surprise (cazzo!), praise (cazzuto), boredom (scazzo), anger (incazzato), approximation (a cazzo) or plain and simple contempt (cazzone). Among the “usi di cazzo” (uses of cazzo) at the Urban Dictionary website are col cazzo (never), alla cazzo (at random), non capirci un cazzo (not understand anything) and cazzi miei (my own business). If you read Italian or Neapolitan, Wikipedia offers even more—and more colorful—expressions.

Under Mussolini’s Codice Rocco of 1930, the use of cazzo and other parolacce (dirty words) became a crime. Of course, Italians didn’t stop swearing; they just found new ways to do so. Instead of porca puttana! (damn whore), they said porca vacca! (damn cow) or they substituted figlio di buona donna (son of a good woman) for figlio di puttana.

Cavolo (cabbage) became a nice, green way to avoid the use of the very strong word cazzo. For instance, if you feel the need to ask “What the hell do you want?”, you might say “Che cavolo vuoi? “ without sounding vulgar. And if someone is spouting nonsense, you are better off saying “Non dire cavolate" (Don’t talk bullshit)) than using a harsher word like cazzate.

However, given the circumstances of the cruise liner’s sinking, “Vada a bordo, cavolo!” would never have sufficed.