The New Words of 2011 in the Italian Language 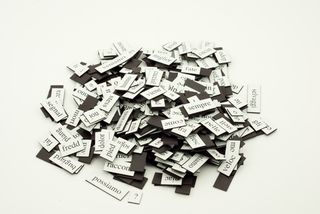 A single word captured the emotional state of the Italian people in 2011, a year of financial crisis (crisi finanziaria) and protest (protesta). In a poll of more than 10,000 readers of La Repubblica, a third chose indignato (outraged). Coming in second with 28 percent was the English word “spread,” which is exactly what indignazione (indignation) did last year.

Yet as I discovered in my dizionario etimologico (etymology dictionary), indignato is a very old word, dating all the way back to 1292, when it was first defined as ”vivamente sdegnato” (ardently disdainful or indignant). Boccaccio used the noun indignazione, defined as "vivo risentimento e sdegno" (intense resentment and disdain), in 1294.

Italians weren’t the only ones to indignarsi (feel outraged). In 2011 we saw tante proteste di arrabbiati, locali e globali (so many protests of angry ones, local and global). The American protesters, piantati nel cuore della Grande Mela (planted in the heart of the Big Apple), coined a new English expression: the 99 percent. The one percent, an Italian journalist explained to readers, is made up of the “pescicani (or pescecani or squali) di Wall Street” (the sharks of Wall Street).

Another English word, “default,” earned third place in the newspaper poll, with 11 percent of the votes. Thanks largely to the iPad and Kindle, “tablet” got six percent, although Americans are more likely to use “notebook” for an electronic reader. An equal number of votes went to equità; (equity). “Twit” (Italian for tweet) got 5 percent of the votes.

The also-rans among the nuove parole (new words) of 2011 were rigore (austerity) and nazione (a tribute to Italy’s 150th anniversary). A word English speakers might use for “slackers” also made the list: fancazzismo, a mix of apathy, total physical and mental laziness, and parasitism. So did  scialla, slang for “stai tranquillo”  or "stai sereno" (take it easy, keep cool, chill out), a popular expression among young people — and the title of a 2011 movie by director Francesco Bruni about the relationship between a melancholy professor and a rebellious teenager (click below to hear the theme song).

Looking ahead, Italians worry whether the potential candidates for le parole del 2012 (words of 2012) might include povertà (poverty), fallimento (bankruptcy), disoccupazione (unemployment), and disperazione (desperation). Yet one word deserves a place on every year’s list: speranza (hope).

muovere a sdegno — rouse to anger

fancazzista –- a lazy bones who doesn’t want to do anything

escort –- a nicer sounding word used to refer to the often underage prostitutes who took part in Berlusconi’s scandalous parties.

Dianne Hales is the author of LA BELLA LINGUA, My Love Affair with Italian, the World’s Most Enchanting Language.