The Passion of the Etruscans 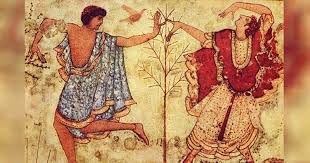 “Rome’s naughty neighbors to the North.” This is how British author D.H. Lawrence described the Etruscans, an ancient people who settled in central Italy in the eighth century BC. Among pre-Roman civilizations, only the Greeks compared in wealth, power, and influence.

Etruria’s sailors (and pirates) established dominion over the Mediterranean. Its engineers, renowned for road and bridge building, constructed ramparts so colossal that they seemed “piled by the hands of giants for god-like kings.” Praised by the Greeks as “very good-looking because they live luxuriously,” the “plump Etruscans” inspired fashions other countries envied and emulated.

Jewelers hammered gold and gems into finely wrought pendants, earrings, and bracelets. Shoemakers cobbled lace‑up boots with pointed toes and sandals with buckles that clicked like castanets. Dentists molded ox and calf teeth into soft gold to form bridges for human mouths that set a standard unmatched until the late nineteenth century.

Yet the Etruscans’ most enduring gift was an ebullient delight in worldly pleasures. Basking amid fertile fields and vineyards, with streams that never ran dry and mountains rich in precious ores, the original bons vivants dedicated themselves to enjoying a bountiful existence in the here and now. Both sexes, lavishly dressed, reclined in pairs on elegant couches, served by slaves and entertained by musicians.

In the fourth century BC, the Greek historian Theopompus described the uninhibited Etruscans stripping off their clothes to exercise in the open air and showing “no shame to be seen committing a sexual act in public.” As he breathlessly reported to his countrymen, “they all engage in making love, some watching one another, some isolating themselves with rattan screens set up round the couches, each couple wrapped in one another—courtesans, young boys, even wives.”

Was he exaggerating? Perhaps, although most of what we know of the Etruscans comes from paintings that portray their passion for life. In vividly colored scenes on the walls of elaborate tombs, muscular men hunt, battle, fight bulls, wrestle, throw javelins, and race four-horse chariots. Naked boys dive from high cliffs into the sea. Dancers, some also nude, with long-limbed Matisse bodies, spin in sensual abandon to the sound of lyres, zithers, and double flutes. Etruscan women, considered the most beautiful and liberated of their age, appear at their husbands’ sides at banquet tables.

The future the Etruscans envisioned after death was neither an ecstatic heaven nor a fearsome hell, but a continuation of their sensual life on earth, as if the party simply resumed on the other side. This benevolent vision of eternity inspired them to accept all that life offered with unabashed exuberance.

Over time the Etruscans lost this zest. Tombs from the second and third centuries BC depict somber faces and stiff bodies lacking the natural grace of earlier eras. D. H. Lawrence blamed the Romans, who cannibalized Etruscan culture and claimed their engineering and artistic feats as their own.

Adapted from LA PASSIONE:How Italy  Seduced the World. Dianne Hales is also the author of LA BELLA LINGUA: My Love Affair with Italian,the World’s Most Enchanting Language and MONA LISA: A Life Discovered.