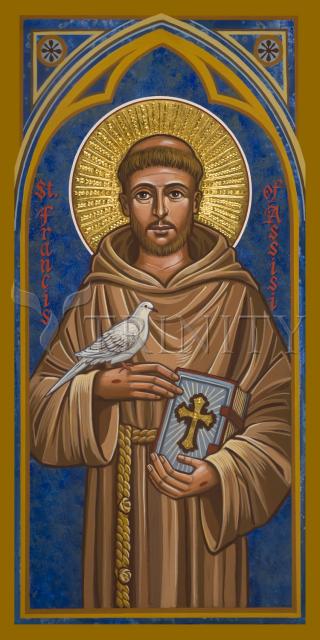 October 4 marks the feast of San Francesco (St. Francis), born in Assisi in 1182,  the son of a prosperous textile merchant.  Young Francesco, the ringleader of a band of hard-drinking, carousing young men, seemed an unlikely candidate for salvation — let alone sainthood.

When Francesco was twenty, the city-states of Perugia and Assisi faced off in one of their frequent clashes. The cavalier playboy, dreaming of chivalric glory, volunteered for the fray.  Captured by enemy troops, he was tossed into a squalid underground cell in Perugia for a year before his father could arrange a ransom.

The traumatic experience shattered his health and transformed the callow youth. Francesco pulled away from his rowdy gang to meditate in the mountains and pray in the dilapidated chapel of San Damiano in Assisi. One day he heard the Christ on the crucifix above the altar instruct him to “repair my house, which you see is in ruins.”

Francesco, taking the instructions literally, hauled bales of precious cloth from his father’s shop to a nearby market town to sell and tried to give the proceeds to the pastor. His incensed father charged his son with theft. At a public hearing before the bishop of Assisi, Francesco turned over the money—along with every stitch of clothing he was wearing. As the naked youth explained to the bishop, he now had only a heavenly father.

Francesco formed a band of “begging brothers,” who built simple huts in the forest around a rustic chapel known as the Porziuncola (Little Portion), now enveloped by the grand Basilica of Santa Maria dell’Angelo. Wearing rough robes cinched with rope and crude wooden sandals, Francesco and his brothers preached their gospel of love and peace among paupers, lepers, and other social outcasts.

Writing in the vernacular of his countrymen rather than the Latin used in Catholic liturgy, Francesco penned poetic odes that conveyed his delight  in being a child of the universe. His rapturous Canticle of the Creatures praised with unbridled wonder Master Sun, Sister Moon, Brother Wind, Sister Water, and Brother Fire.  These  lyrical verses transformed his spiritual passion into the first major work in the Italian language.

Francesco’s health, always precarious, deteriorated over two decades of preaching and fasting. At age forty-four, blind (following cauterization of his eyes to treat an infection), emaciated, and racked with pain, he died in a dark, low cavern near the Porziuncola.

Despite a steady stream of tourists, Francesco’s humble chapel, infused with centuries of heartfelt pleas, remains one of my favorite places to kneel and reflect.

“Your prayers will be answered,” a kindly friar told me on my most recent visit.

“I know,” he said, explaining that when God asked what he would like in return for his devoted service, Francesco requested only that those who come to this chapel and “pray with a devout heart will obtain what they ask. My prayers for a friend with breast cancer were indeed answered—for which I thank Italy’s beloved patron, God, and the state-of-the-science care she received.

Adapted from “A” Is for Amore, which you can download for free by clicking here.  Dianne Hales is also the author of  LA PASSIONE: How Italy Seduced the World; LA BELLA LINGUA: My Love Affair with Italian, the World’s Most Enchanting Language; and MONA LISA: A Life Discovered.