The Pope Makes History in the Italian Language 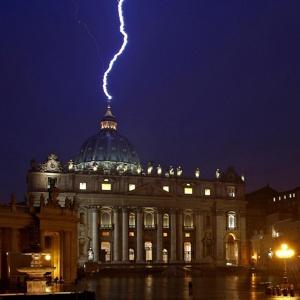 “Nevica spesso a Roma?” I asked as flurries fell on a February day. (Does it often snow in Rome?)

“A ogni morte di papa,” my friend replied. (At every death of a pope.) Which, I figured out, meant hardly ever—or, as we would say in English, “once in a blue moon.” A pope’s stepping down is even rarer: a once-every-six-centuries (una volta ogni sei secoli) phenomenon.

The resignation of Pope Benedetto XVI, more often referred to by his family name of Papa (pronounced with the accent on the first syllable to distinguish it from “papà” for “Dad”) Ratzinger in Italy, hit like “un fulmine a ciel sereno” (a lightning bolt in a clear sky). And indeed lightning did strike St. Peter’s just hours after the announcement.

Such an estremamente raro (extremely rare) event last occurred circa 600 anni fa (about 600 years ago). The più recente (most recent) resignation was that of Pope Gregory XII -– on July 4, 1415. In the Divine Comedy, Dante damned Pope Celestine V, who resigned in 1294, for his gran rifiuto (great refusal) and placed him among the slothful in hell.

"Lascio per il bene della Chiesa.” (I leave for the well-being of the Church.) Pope Benedict announced. “Vivrò una vita di preghiera." (I will live a life of prayer.)

In the coming weeks the collegio cardinalizio (college of cardinals) must select a new pontiff from several leading candidates or “papabili” (those eligible or likely to be pope). They include an American, a Brazilian, a Canadian, several Africans and a few Italians.

"Morto un papa se ne fa un altro,” Italians say with a shrug. When a pope dies—or, in this case, si dimette (resigns)–another is made. In other words, no one is irreplaceable.

Popes creep into other common expressions in Italian. English speakers, for instance, may aspire to live like a king; Italians, “stare come un papa” (to be like a pope). But even a king might miss the main point of an experience. In such situations, one might as well andare a Roma e non vedere il papa (go to Rome and not see the pope).

fumata bianca –- -white smoke, which signals that the conclave has elected the new pope

fumata nera —  black smoke), which signals that the conclave hasn’t yet made a choice

Dianne Hales is the author of LA BELLA LINGUA: My Love Affair with Italian, the World's Most Enchantin g Language.