The Queens of Tennis in the Italian Language 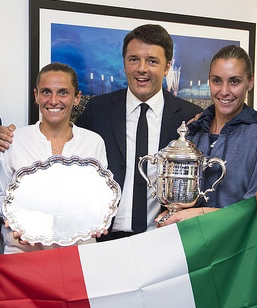 The two Italian athletes (le due atlete italiane) were indeed the talk of the town—in New York and everywhere else. Although both had long and successful careers in professional tennis, hardly anyone outside Italy or the sports world knew their names.

Flavia Pennetta from Brindisi, the first Italian woman ranked among the top ten players in the world (le prime dieci giocatrici del mondo), is considered by some the best female Italian player ever (la miglior giocatrice italiana di sempre). Click here for some of the reasons she won America's heart.

Roberta Vinci from Taranto was ranked as number 43 before the U.S. Open. A striking series of victories (una strepitosa serie di successi) brought her to the semifinals to face the formidable player the Italian press calls “Big Serena,” a living myth of modern tennis (un mito vivente del tennis moderno). Legions of fans were waiting for the moment of triumph (il momento del trionfo) when she could clench four “Grand Slams” in a single calendar year.

The two Italian tenniste first picked up rackets (hanno preso le racchette da tennis in mano) at age six. They began playing together at a tennis camp when they were nine years old (avevano nove anni). After decades as teammates, they describe themselves as more sisters than friends (più sorelle che amiche). Even after Roberta lost the final to Flavia, both shared the joy of a great victory for Italy and for women’s tennis (una grande vittoria per l’Italia e per il tennis femminile).

A game similar to tennis dates back to ancient times. According to Homer, the beautiful daughter of a Phoenician king had been playing a “ball-in-hand” game on the beach before rescuing the shipwrecked Odysseus. In France jeu-de-paume (game with your palm), the favorite sport (lo sport prediletto) of kings and aristocrats, involved throwing a small leather ball (palla) with a gloved hand over a rope separating a field in half.

In the mid-sixteenth century, an Italian priest from Salo introduced wooden pallets, a precursor of current rackets.  Players in France would call out “Tenez!” (Hold!) before putting the ball in play. British players mangled the word into “Teni!” and then “Tennis.”

In Italian lob translates as pallonetto; service,  as servizio; fault, as fallo; return, as rimessa; forehand, as dritto; and backhand, as rovescio. However, Italian uses the English terms for “break” and “match point.”  A "slam" is a slam, and a Grand Slam is just as grande in Italian as in English.

Another tennis term that does not translate into Italian is “love,” the starting score for players. Some say it derives from the French l’oeuf for egg, which resembles a zero. Others contend that it underscores the reason men and women play the game: for love. And love, in every language, is what surrounded the two regal Italians crowned with glory in a stadium located in a New York City borough called Queens.