The Secrets of a Roman Stationery Store 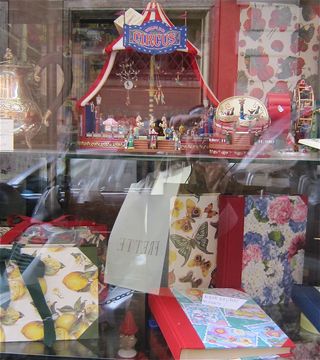 Italy’s tradition of making beautiful paper dates back to the 7th century, when the Arabs introduced techniques they had acquired in the Far East. In the 13th century the powerful Chiavelli family in Fabriano near Ancona created the first great center of the paper-making industry. Its first official document, dated 1283, was the deed of a public notary recording the purchase of a house by a cartaio (paper maker), witnessed by another six paper makers.

The Chiavelli family fiercely guarded its secrets, and anyone divulging information about the process faced a stiff fine. However, when only one old maestro knew the family’s trade secrets, local authorities intervened and ordered him to pass them along to an apprentice. Today you can trace the evolution of paper over the centuries at Il Museo della Carta e della Filigrana in Ancona.

I discovered a secret of another sort at the Cartoleria Imperiale. The owner’s husband, Andrea Ospici, invited me into the adjacent studio where Gabriella Venturi meticulously crafts her beautiful designs. When I asked if he shared his wife’s passion for paper, he pointed to the walls, covered with bold abstract paintings.

“Dipingo” (I paint), he said modestly. As I looked around, I felt the power of his dramatic compositions. Only later did I learn that Ospici is a widely recognized pittore (painter), born in Rome of Venetian parents. He dedicated much of his working life to Grafica Pubblicitaria (advertising graphics), but has returned fulltime to la pittura (painting), which he describes as “quale coronamento della sua anamnesi vitale” (the crowning of his life’s history).

Ospici has participated in many mostre (exhibitions) in Italy and other countries and has won il plauso della critica e numerosi premi (critical acclaim and numerous prizes). You can view and purchase his works at his website. 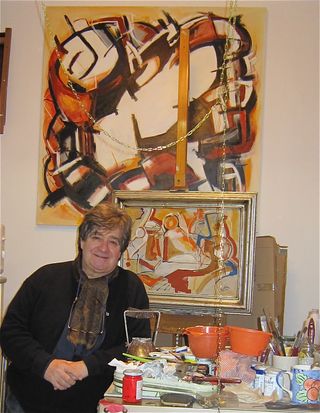 avere le carte in regola — to have one’s paper in order, to have the right credentials

avere carta bianca — to have total freedom in taking decisions, to have a free hand

Carta canta e villan dorme — “Paper sings, and the peasant sleeps.” Its meaning is close to the Latin expression, “verba volant, scripta manent” (spoken words fly away, written words are here to stay). Since written agreements cannot be contradicted, even a peasant can sleep without worries if he has everything in writing.