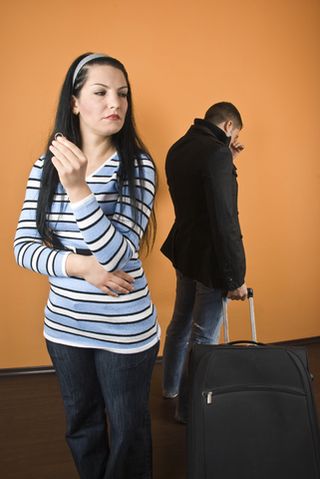 The State of Italian Marital Unions

Classic Italian love stories end with the words, “E vissero felici e contenti” (And they lived happily thereafter). Times have changed. An Italian marriage now lasts an average of fifteen years. According to a new report on the state of Italians’ unions. more people are becoming divorziati (divorced). From 1995 to 2008, separations increased by 61 percent and divorces raddoppiati (doubled).

"Il divorzio,” no linguistic newcomer, entered the Italian language in the 14th century, according to my etymological dictionary, which defines it as “scioglimento legale del matrimontio durante la vita dei coniugi” (the legal termination of a marriage during the life of the spouses). But it wasn’t until 1974, after decades of controversy and despite stiff opposition by the Catholic church, that Italians voted for il Referendum sulla legalizzazione del divorzio (the referendum on the legalization of divorce).

The plight of unhappy couples trapped in miserable marriages prior to this vote inspired the delectable 1961 movie Divorce, Italian Style. Played by the marvelous Marcello Mastroiianni, Ferdinando (Fefé) Cefalù, a Sicilian baron, longs to rid himself of Rosalia, his insufferably suffocating wife, and fantasizes about her dying (see clip below).  Desperate to marry his nubile young cousin, Fefé plots to lure his spouse into the arms of a former lover so he can murder her in a justifiable effort to save his honor.

Italians no longer have to resort to such extreme measures. For every thousand marriages, 286 end in a separation (finiscono in una separazione) and 179 in un divorzio. Like everything else in Italy, separation rates vary regionally—from a low of 186 per 1,000 marriages in the South to a high of 363 per 1,000 in the Northwest.

Generally, couples are required to be legally separated for three continuous years before their divorce is finalized.  The median age (l’età media) at separation is 45 for men and 41 for women; for divorce, 46 and 43, respectively.

So what leads to divorce in Italy? According to the University of Rome's "Grounds for Divorce and Maintenance Between Former Spouses," 98 percent of divorces stem from “a breakdown in the material and spiritual areas formerly shared between a legally joined couple” (la cessazione della comunione di vita materiale e spirituale tra i coniugi). Many couples simply cite irreconcilable differences (differenze inconciliabili) or incompatiblity (incompatibilità).

So what could help marital unions last longer?  Here are some classic Italian sayings:

My personal favorite is the first expression I taught my husband of thirty-two years to say in Italian:  Mia moglie ha sempre ragione. (My wife is always right.)