The Stuff of Life in the Italian Language 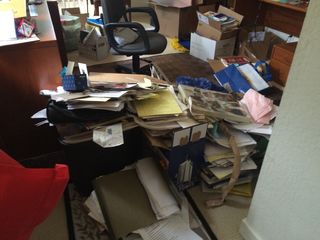 In English "stuff" happens. And when it keeps happening over more than a quarter-century, stuff accumulates. Now, overwhelmed by the formidable task of downsizing, I look at the piles of papers in my office and exclaim,  “Quanta roba!” (“What a lot of stuff!”)

The first time I confronted the Italian word for "stuff" I assumed  that it referred to  something soft and cozy you slip into at night.  That sort of robe, I learned,  is called una vestaglia or una veste da camera (a gown of the room, or a dressing gown). Although dottori e magistrati (doctors and magistrates) of the Cinquecento (1500s) dressed in a flowing garment called a robone, today roba refers to all the things that fill our shelves, clog our closets, and clutter up the garage.

“Cos’è quella roba?” (What is that stuff?) a friend asked when she saw the detritus of a writer's life: articles, drafts, proposals, photographs, proofs, galleys, manuscripts, books upon books —tanti libri (so many books)!

"Non è  roba tua!” (it’s not your stuff) I said defensively, meaning that it wasn’t her problem. I never worry about la roba d’altri (other people’s property), because it’s all I can do to keep track of la montagna  di roba (the mountain of stuff) that belongs to us.  I also recall the commandment: Non desiderare la roba d’altri  (Thou shall not covet they neighbor’s goods).

A dictionary from  the second half of the 1300s defined la roba as the material things that one possesses or “che serve in genere alle necessità del vivere” (that serve in general the necessity of living).  Of course, you need roba da mangiare (stuff to eat), and most of us have a taste for la roba dolce o la roba salata (sweet  things or salty foods).

Where would you sleep and sit without roba di casa (furniture)?  And all of us have roba di valore (valuable stuff)  or oggetti preziosi (precious objects) that we hope never become la roba, as police use the word to refer to stolen goods. Less valuable stuff  – roba a buon mercato (cheap goods), roba di scarto  (rejects, seconds) and roba usata (second-hand stuff) — is likely to end up with a robivecchi  (junk dealer) or get thrown away as  robaccia (rubbish).

Certainly no one can deny that stuff matters –- literally and figuratively.   “Un uomo senza roba è come una pecora senza lana,”  an Italian proverb states. “A man without 'stuff' (possessions) is like a sheep without wool.”  But listen carefully when Italians bring up “stuff.”

“Che roba!” (How awful!) is a common response to hearing of someone’s misfortune. “Roba da matti!”   or “Roba da chiodi!”  Italians exclaim  when confronted by something strange or unbelievable. “Non è roba per te“ means it’s not stuff (not fit) for you.  Or an Italian might dismiss something inconsequential as roba da niente or roba da nulla (stuff of nothing). The sarcastic equivalents of “Big deal!” are "Sai che roba! " (You know what stuff!) and  “Bella roba!”  (literally, fantastic or nice stuff!).

Di che roba è fatto? or Che roba è? –What stuff is it made of?

← "My Little Potato" and Other Endearments in the Italian Language “Please, speak Italian!” →
FOLLOW BY RSS