The Year of Dante: Learning to Love Italy’s Greatest Poet 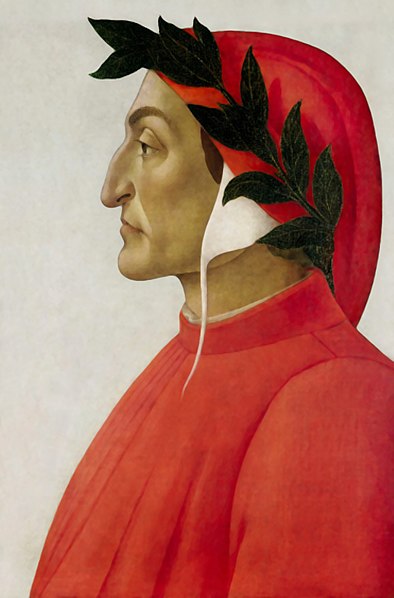 It was dislike at first sight.  Everything about Dante Alighieri (1265-1321) put me off. As artists traditionally portrayed him, the medieval poet seemed a ferocious grump with a big beak, jutted chin, petulant sneer, and hooded eyes. Although writers like William Blake learned Italian just to read Dante, I resisted.  His Divine Comedy seemed too daunting, too distant, too terribly fourteenth-century.

Then an Italian professor showed me a copy of the first adaptation of the La Divina Commedia  that she read as a girl of eight: a vintage Italian Walt Disney comic book featuring Mickey Mouse (Topolino in Italian) as Dante with Minnie Mouse as his adored muse Beatrice.   A bicycle-riding Goofy stands in for Virgil, the great Roman poet who guides Dante through the perils of the Inferno. On the final page, Mickey, Minnie, and Donald Duck (in a deus ex macchina appearance) beam from a cloud in paradise.

This whimsical treatment of a stirring adventure tale made me think that I may have been wrong about Dante.  Although tempted  to start with contemporary  cartoon adaptations, I bought an English translation of the Divine Comedy—several, in fact, although I’m partial to John Ciardi’s.  My unanticipated reaction: Wow!  Like modern readers ensnared by the wizardly world of Harry Potter, I skidded into an unknown universe, a fully imagined alternate world. An action-packed, high-adrenalin, breath-taking, rip-roaring yarn leapt off the pages into vivid, writhing, pulsating life.

What is the secret of Dante’s enduring appeal? “He could find and create poetry in everything,”   the actor Roberto Benigni, an acclaimed Dantista, explained several years ago when I interviewed him in Rome. “He doesn’t say you should avoid evil in life—which is impossible—but you should confront it every day, because in that struggle every single human being has the potential of becoming something magnificent, a wonder of the universe.”

Unlike other great writers such as Shakespeare or Cervantes, Dante is not just a literary giant, but his country’s foremost national hero.   “In countries like England and Spain, the nation came first, then the culture developed,”  explains Benigni, who describes La Divina Commedia as a great gift to Italians. Just as Americans celebrate George Washington as the  father of our country, Italians honor Dante for giving them both the foundation of their  culture and the dream of a united nation.

You can  learn about special events commemorating the 700th anniversary of the poet’s death during this Anno Dantesco (Year of Dante) here. If you can’t travel to Italy, you can read The Divine Comedy in translations or online at the Gutenberg Project.