Celebrating Italian Cooking in the World 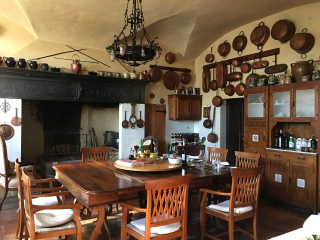 Italy’s food and language meld together as smoothly as cacio sui maccheroni (cheese on macaroni). Both boast a rich and rollicking history dating back to ancient times. Both vary greatly from region to region, even from village to village. Both reflect centuries of invasion, assimilation and conquest. And both can transform daily necessities into vibrant celebrations.

Alta cucina (haute cuisine) descends from la cucina principesca, the refined dishes prepared by the cooks of the nobility. Cucina povera (cooking of the poor or peasant cooking) refers to a now-fashionable mode of Italian cooking that uses the basic ingredients that were the only things available to i poveri (the poor).

Italians’ (and my) favorite cooking is cucina casalinga (home-cooking). In cucina (in the kitchen) I like to read aloud the lilting words for simple culinary techniques such as rosolare (make golden), sbriciolare (crumble) and sciacquare (rinse).

But Italian’s gastronomic words do more than tease or appease the appetite. They spice up daily conversations. “Cosa bolle in pentola?”( What’s boiling in the pot, or cooking?) Italians ask when they want to know if something is going on. Gotten yourself into a mess? You’ve made an omelette (fatto una frittata). Fed up and can’t take any more? You’re at the fruit (alla frutta) or the final course. Have a crush on someone? You’re cooked (cotto).

Italians compare a busybody who noses into everything to prezzemolo (parsley), They call someone uptight a baccalà (dried cod); a silly fool, a salame (salami); and a bore, a pizza. They dismiss a story told time and again as fritta e rifritta (fried and refried) and something that’s all sizzle and no steak as tutto fumo e niente arrosto (all smoke and no roast).

When a speech, book or movie is slapped together in a hodgepodge manner, critics find it as hard to digest as a polpettone (big meat ball). Cucinare qualcuno (to cook someone) means treating him as he deserves–cooking his goose, so to speak. But if you’re told to farti i cavoli tuoi, that has nothing to do with making cabbage. This idiom translates as, “Mind your own business.”

This month Italian cultural centers are celebrating la cucina italiana with special events in San Francisco, Los Angeles and other cities. Their theme provides words to live by all year long:  Eat, drink and be Italian!