The Year of Italian Culture and Language: Puccini and His Tower 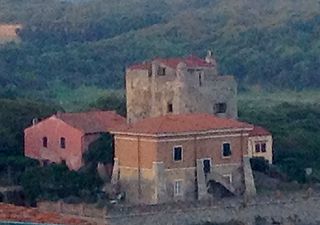 On our last visit to Italy, we stayed on the Tuscan coast near a fifteenth-century tower (una torre cinquecentesca). Once called Torre Tagliata, for the name of the beach below, it became known as Torre Puccini in honor or the composer who lived there off and on in the final years of his life.

Giacomo Puccini, an ardent hunter and fisherman (cacciatore e pescatore), loved the wild marsh land of the Maremma. In 1920 he bought the crumbling tower (torre franante) on the windblown beach and became friends with his only neighbors: the men of the local Guardia di Finanza (a branch of the police), whose caserma (barracks) were next door.

Many evenings, one of the officers recalls in a memoir I came across in our friends’ villa, il Maestro shared "la nostra modesta tavola" (our modest table), "mangiando persino il nostro minestrone" (even eating our soup). The celebrated composer, "forse nauseato dalla vita spesso falsa delle alte sfere sociali" (perhaps sick of the often false life of the high social spheres), seemed to prefer "la semplicità e la sincerità" (the simplicity and sincerity) of the men who guarded the wild coast from pirates.

On the evening of December 25, 1920, Puccini invited the commandant to listen with him as the librettist Giuseppe Adami read the first act of the opera Turandot, the story of una principessa cinese (a Chinese princess) whose cold heart is melted by love.
The two men listened in silence in "quella desolata culla della civiltà etrusca" (that desolate cradle of Etruscan civilization).

That very night Puccini sat down at his piano and filled the stillness with le note felici (happy notes). His uniformed friend smiled as he listened to the onde di melodia (waves of melody) accompanied by the fragorosa cadenza del mare (resounding cadence of the sea).

Puccini died of complications of throat cancer treatment before completing Turandot, although he left dozens of pages of notes for its end. At its premiere at La Scala on April 25, 1926, a year and five months after his death, Toscanini put down his baton in the middle of Act III and said to the audience, “Here the opera ends because at this point the Maestro died.”

The men of the Guardia in Ansedonia celebrated the immancabile successo (inevitable success) of Turandot, despite their grief for the Maestro who showed such grande ammirazione e affetto
(great admiration and affection) for them and for whom they felt imperitura devozione (everlasting devotion).

What lives on to this day is Turandot’s most famous aria, Nessun Dorma:

Even you, oh Princess,
in your cold room,

watch the stars,
that tremble with love and with hope.

But my secret is hidden within me,
my name no one shall know…

Dianne Hales is the author of La Bella Lingua: My Love Affair with Italian, the World's Most Enchanting Language.  Click here for more information on joining her for a week of writing, cooking, and savoring Italian pleasures in Capri this fall.

← Taking a Cut of the Italian Language The Year of Italian Culture and Language: Italian Cinema →
FOLLOW BY RSS