The Year of Italian Language and Culture: An Ancient “Sin City” 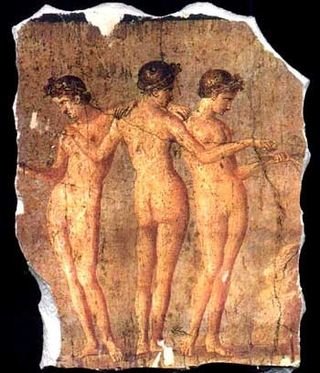 The Last Days of Pompeii

The exhibit with this name at the Cleveland Museum of Art, part of the year of Italian culture (l’anno della cultura italiana), is subtitled: “Decadence, Apocalypse, Resurrection” (Decadenza, Apocalisse, Resurrezione). Pompeii, a  World Heritage Site (patrimonio mondiale dell'umanità), is famous for all three.

The thriving Roman city of about 12,000 citizens was buried (sepolta) by an eruption of Vesuvius in 79 A.D. Excavations, which began after the discovery of the lost city (la città perduta) in the eighteenth century, have yielded a fascinating glimpse of life in what seems to have been the Las Vegas of its day.

In this thoroughly pagan place (luogo completamente pagano), pleasures (piaceri)—of the bedroom, the table, the theater and the sports arena—were the true religion (la vera religione). Yet we owe a debt to Pompeii's freewheeling citizens: They had an incorrigible urge (irrefrenabile impulso) to write on walls. The sheer zest of the words in the 15,000 graffiti and inscriptions (iscrizioni) they left behind testifies to the potency of the Roman vernacular, or volgare.

"Vulgar" also applies to the graffiti on the walls of Pompeii's infamous brothels, where satisfied customers (clienti soddisfatti) scrawled crude testimonials to the skills of particular prostitutes. But not all of Pompeii's writings are so explicit (così espliciti).

In a simple red or black script with letters about six inches high, signs along the town's narrow streets (strade strette) endorsed political candidates, denounced deadbeats and issued no-nonsense directives, such as "If you must lean against a wall, lean against someone else's."
Scrawled on the floor of a trading house were the words, "Welcome, money!" (Benvenuto, denaro!)

A notice in the dining room of a fashionable home asked visitors to refrain from casting lascivious looks at the serving women or making passes at the wives of other guests and, above all, to keep the conversation clean.
"If you can't," the blunt last line exhorted, "please go home." (Se non vi è possibile, siete pregati di andarvene.)

“The Last Days of Pompeii: Decadence, Apocalypse, Resurrection” runs from February 24 to July 7, 2013 at the Cleveland Museum of Art.

← The Pope Makes History in the Italian Language Come Write, Cook, and Enjoy Capri with Me! →
FOLLOW BY RSS