The Father of the Italian Language at 750

Italy is celebrating the 750th anniversary of the great poet's birth with readings, conferences, films, even a theatrical production starring a hologram of the father of the Italian language (il padre della lingua italiana). I will be paying tribute in several posts over the coming months. 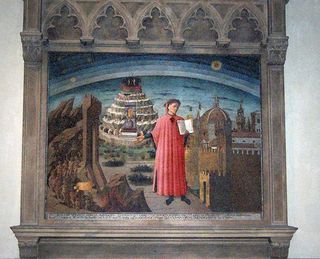 Born in Florence, Dante was christened Durante (yes, as in Jimmy). As a boy, he caught a glimpse of Beatrice, daughter of a distinguished Florentine family, in the local church called La Badia (where lovers still leave flowers and notes at Beatrice’s tomb). Despite Dante’s unrequited, undying crush, the two rarely met and barely spoke. Both entered arranged marriages. Dante’s wife Gemma bore him at least three children, but neither she nor his offspring merit a single mention in his works.

Drawn to Florence’s raucous political life, Dante, as a White Guelf, served as a town prior. In 1301 civil war ripped the city apart. In Rome on a papal mission, Dante escaped the bloodbath but faced trumped-up charges of misuse of public funds. If Dante ever were to return, he would be burned to death.

Everything Dante had worked for and earned—every shred of dignity, security, comfort, influence and respect—disappeared overnight. At age 36, he was penniless, friendless, powerless, homeless–as he put it, “a ship without sails or rudder, driven to various harbors and shores by the parching wind that blows from pinching poverty.”

Wandering through the hostile countryside,  Dante would hang his hat on a peg in the center of a new town and trade his services for a meal and a roof—if only in a barn or stable—for the night. For a while Dante joined with other White Guelfs in plots of vengeance, but eventually declared himself a party of one.

Around 1307 Dante began work on what he called La Commedia (designated a comedy because it begins in sadness and ends in happiness).  According to Boccaccio, his first biographer, Dante would finish six to eight cantos at a time and send them to his publisher to make copies, which began to circulate in 1313 or 1314

Dante’s epic was an instant sensation, with its fame spreading quickly throughout the peninsula and beyond. Throughout Italy’s villages people gathered in the central piazza  for readings of La Commedia. Peasants memorized melodic lines and shared them as they worked the fields. Dante, who never returned to his native Florence, died of malaria in 1321 and was buried in Ravenna, where his remains still lie.

Unlike other great writers such as Shakespeare or Cervantes, Dante is not just a literary giant, but Italy’s foremost national hero. No one can claim a greater hold on the Italian soul.  Just as Americans celebrate George Washington as the father of our country, Italians cherish Dante for giving them both the foundation of their  culture and the dream of a united nation.

Nel mezzo del cammin di nostra vita / mi ritrovai per una selva oscura / ché la diritta via era smarrita –– the first lines of The Divine Comedy: Midway upon the journey of our life / I found myself within a forest dark / For the straightforward pathway had been lost.

L'amor che move il sole e l'altre stelle — the last line of The Divine Comedy: The love that moves the sun and the other stars

Click below to listen to Roberto Benigni's reading of Dante in the Italian Senate as part of the commemoration of his 750th birthday:

← What's in an Italian name? Dante Lives in the Italian Language →
FOLLOW BY RSS