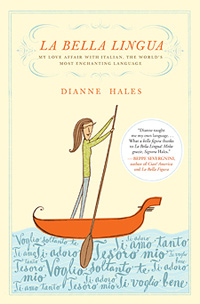 This week marks two milestones for La Bella Lingua : the seventh anniversary of its publication in 2009 and its appearance as #8 on the New York Times E-Book Best Seller List.  I cannot think of a nicer –- or more unexpected — birthday present for a book that changed my life and then took on a life of its own. 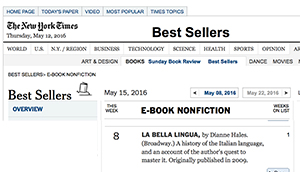 The inspiration came from my wonderful agent and friend Joy Harris. Almost a decade ago, as we were tossing around ideas for my next trade book, she suggested that I write about a subject I obviously loved: Italy.

“Impossible!” I protested. “So many people have written so much about Italy that there’s nothing left to say.”

“What about Italian?” she asked. “You’ve been studying it for years, and you light up when you talk about it. Why don’t you tell its story?”

Immersing myself in research, I quickly discovered that the history of the world’s most enchanting language has every element of a great drama: adventure, romance, passion, beautiful women, gallant heroes, unscrupulous scoundrels—not to mention glorious music and fabulous food. Over the course of several years, I traveled to universities, museums, palazzi, theaters, culinary academies, libraries, and great citadels of Italian, such as L’Accademia della Crusca, to interview scholars and linguists. But my greatest resource turned out to be the Italian people, who enthusiastically shared their knowledge and pride in their beautiful language.

As the pub date approached, I fretted about how Italians might respond to a non-Italian’s biography of their language, but teachers of Italian, Italian-American associations, and Italy’s ambassadors and cultural

officers embraced La Bella Lingua. The Consul General in New York City described the book as “pivotal” because it marked the transformation of Italian from what was once considered just another ethnic tongue to a cultural language that everyone, even non-Italians like myself, can appreciate. In 2011 the President of Italy awarded me the highest recognition the government can bestow on a foreigner — a knighthood, with the title of Cavaliere dell'Ordine della Stella della Solidarietà Italiana (Knight of the Order of the Star of Italian Solidarity) — for the contributions La Bella Lingua has made in promoting the Italian language.

La Bella Lingua went on to become a long-running best-seller on amazon.com and in Canada and Australia, the subject of an acrostic in the Sunday New York Times, and the topic of several dissertations by Italian graduate students. In its seven-year lifespan this blog has attracted more than 1.2 million views from just about every country on the planet. But the most heart-warming responses have come from the readers who tell me that La Bella Lingua has touched their lives, inspiring some to study Italian, trace their Italian roots, or embark on daring explorations of their own. I credit the book’s enduring appeal to its inspiration: the beautiful Italian language.

I’m delighted to announce new chapters in La Bella Lingua’s life: An audiobook will be released on audible.com later this year. And I am about to begin work on a revised, updated version to be published by the Crown Publishing Group, a division of Penguin Random House.

Grazie di cuore for your support of La Bella Lingua and the language so dear to so many hearts. Click below to listen to a song it inspired.  Viva l'italiano!

← Italian You Won't Learn in Class: Colorful Expressions A Mouthful of the Italian Language (Part 1) →
FOLLOW BY RSS