Three Reasons to Fall in Love with Sicily 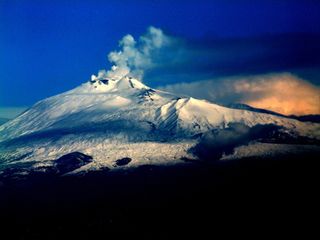 I have yet to visit Sicily, although I hope to soon. In the meantime, I asked the folks at Go Ahead Tours what they love most about the Mediterranean's largest island., Here are their top three favorites Sicilian destinations — all part of Go Ahead's Best of Sicily tour. (Click here to enter our "Fall in Love with Italy" contest and the chance to win a $500 gift certificate for this or any of Go Ahead Tour's other Italian trips.)

Europe's largest active volcano, Mt. Etna has regularly shown off its temper since antiquity. (In Greek mythology, Zeus imprisons Typhon, "the father of all monsters," beneath Mt. Etna.)  Etna's frequent eruptions have raised its peak high above the surrounding plain. Etna shoots up from flat ground to nearly 11,000 feet in the air with no foothills in sight.

Four separate calderas can be seen at the mountain's peak, while more than 300 smaller vents on Etna's flanks help prevent a catastrophic eruption like the one that destroyed Mt. St. Helens. While Etna's eruptions often produce clouds of ash and the "globes of fire" Virgil describes in the Aeneid, Sicily's most famous mountain has also been observed emitting smoke rings, an extremely rare occurrence in volcanology.

Though it's now part of Italy, Syracuse is a decidedly Greek town. Located on the southeast corner of the island, Syracuse was once a great Mediterranean power thanks to its strategic situation athwart vital sea lanes. After forming an alliance with Sparta's Peloponnesian League, Syracuse witnessed the foundering of the Athenian navy on its shores, an event that would precipitate the conclusion of the Peloponnesian War… and serve as an eternal warning for overly ambitious empires.

The city was also home to the famous polymath Archimedes, one of the great engineers of the ancient world. Legend has it that Archimedes devised ingenious, almost magical devices to defend his hometown during the Athenian invasion, including mirrors that reflected the sun to set fire to Athenian ships and an enormous claw designed to pluck boats from the water.

Just a few short miles from Mt. Etna, you'll find Taormina, Sicily's favorite resort town since ancient times and home to perhaps the most dramatically situated theater in the world. The Greek Theatre (known locally as the Teatro Greco) appears at first blush to be a carbon copy of the amphitheater in Syracuse. But when you take a seat where the ancient Greeks would have sat, you face southwest, which makes the snowy slopes of Mt. Etna and the gorgeous Sicilian coastline the backdrop for every scene.

The city's architecture reflects Sicily's unique blend of cultures from around Europe and Africa, from the Normans to the Greeks to the Arabs. Nature lovers should take time to explore Isola Bella, a teardrop-shaped island in the heart of Taormina's tranquil cove. You won't need a boat to get there, since a rocky sandbar connects Isola Bella to the mainland.

Words and Expressions in Sicilian