Time Travel in the Italian Language 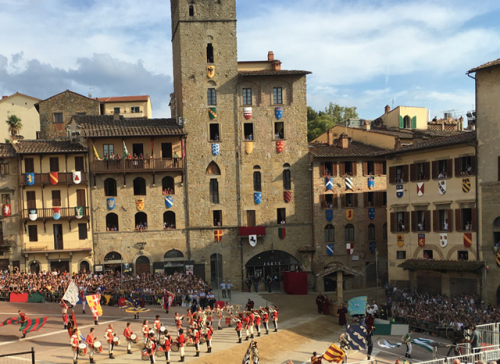 Part of Italy’s fascino (charm) is the sense of passing through a portal back into time, a sensation I experienced during Arezzo’s jousting festival, La Giostra del Saracino. Twice a year Arezzo’s citizens (gli aretini) dress up in farsetti medievali (medieval doublets), pantaloni ampi (pantaloons) and corsaletti (corsets) per fare una sfilata sfarzosa e colorata (to parade through the streets in colorful pageantry) in preparation for a historic competition that dates back to the 1300’s. La Giostra del Saracino may have originated during le crociate (the Crusades), when jousting served as a military training exercise. The rules of Arezzo’s competition have not changed much since.

The city is divided into quattro quartieri (four neighborhoods) that represent Arezzo’s ancient noble families. Each neighborhood selects two jousters who train throughout the year. In addition, each quartiere selects a vast assortment of valletti (footmen or valets), musicisti (musicians), sbandieratori (flag jugglers), cavalieri e nobildonne (knights and ladies) to march in parades in the days prior to the event per dare sostegno ai valorosi cavalieri (to support the gallant knights). During the competition each jouster gallops his horse up a track called the lizza, which is constructed in the center of town. 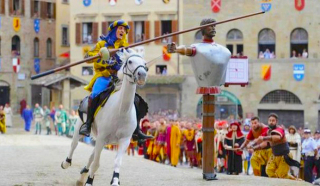 A week before la giostra the city’s Piazza Grande is filled with packed dirt and sand. Spectator stands (impalcature tribune) are set up for visitors and citizens to enjoy the show. To prepare for the joust, i cavalieri fanno le prove nella piazza (the riders on horseback practice in the piazza). The evening before the joust, each of Arezzo’s four neighborhoods celebrates by holding “La Cena Propiziatoria” (the good luck dinner) presided over by the neighborhood rettori (presidents) and the jousters themselves. It is a festive event with una pizza o una grigliata (a pizza or a barbeque), dancing and singing in the streets amid un mare di striscioni colorati (a sea of colorful banners).

Everyone, regardless of neighborhood, becomes a tifoso / sostenitore (a fan) of this magical gara (competition). On the day of the event, dressed elegantly as medieval knights, the jousters take turns attacking a swiveling “Buratto,” the Saracen dummy that represents the King of the Indies. Depending on the skill and accuracy of each strike, the team earns a certain number of points. The task is made more complicated by the rotating dummy that carries with it the mazzafrusto (flail). If a rider is too slow, he is in danger of being hit in the back by the whip. The object is to strike the bersaglio (the score card) held by the Saracen dummy squarely in the middle with a wooden lance.

At the end il vincitore (the winner) is declared and claims the prize of la lancia d’oro (the Golden Lance). Members of the winning neighborhood then parade to the Duomo where they give thanks to Our Lady of Consolation, the patron saint of the city. Arezzo then settles back into its regular routine, with each neighborhood vowing to return to win la prossima sfida (the next challenge).

Melissa Muldoon writes the dual language blog StudentessaMatta.com in Italian and English, produces Matta Youtube videos in Italian, co-leads Italian Language Immersion programs in Lucca and Arezzo and organizes Homestays with Italian teachers. She is also the author of a new novel called Dreaming Sophia, in which the main character talks to famous Italian personalities of the past, including Michelangelo, Leonardo, Garibaldi and Lorenzo de’ Medici, available in print and e-pub versions on amazon and on the DreamingSophiaBook.com web site.