Plumbing Problems in the Italian Language 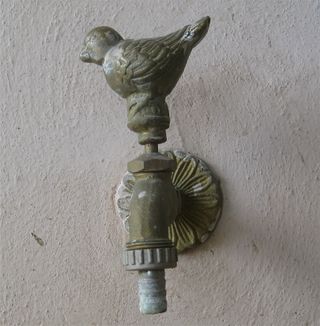 I learned the Italian word for pipe the way most of us acquire the vocabulary of plumbing—the hard, wet way.  One evening we spied a small pool of water in a bathroom of the house we rent every summer.  I called Ubaldo, the caretaker.

“Una perdita (a leak),” he pronounced. “Una cosa da niente (It’s nothing).” He advised me to cover the floor with some towels  (asciugamani), which were soon soaked through.  Within an hour the puddle had trickled into the living room. We began rolling up the rug and moving furniture.

I reached for my Italian dictionary and again called Ubaldo, who promised to bring un idraulico (a plumber) in the morning.  I feared that by then the entire house might be sott’acqua (under water).

“C’è già un ruscello (it’s already a stream),” I said. I could almost see him shrug his shoulders.

“C’è un torrente (torrent),” I added and then elaborated:  “Un fiume (a river), un lago (a lake), un mare (a sea), un’alluvione (a flood)!”  Impressed more by the rising panic in my voice than by my newly acquired aquatic vocabulary, he agreed to come immediately.

“Il tubo è otturato (blocked),” he declared upon quick inspection. (“The pipe is blocked.”) With a flurry of words I recognized only as parolacce (obscenities), he marched off to retrieve an old-fashioned pick-ax and shovel

“I tubi vecchi!”  (“The old pipes!”) Ubaldo sighed as he set to work uncovering the network of tubatura  (piping) under the front lawn.  Then this seventy-something-year-old sprite of a man, with a boyish mop of hair and a ready twinkle in his eye, waged battle against a force of nature. There were curses. There were groans. There was much hauling of hoses and turning on and off of spigots. And then there was hand-to-hand combat.

“Look at what he’s pulling out of that pipe!” my husband said with wonder in his voice.  I, never eager to behold the contents of any drain (tubo di scarico), demurred. Bob, fairly fastidious about such things himself, insisted.

Ubaldo was tugging with all his might at what seemed to be a mammoth serpent emerging from the ground. It resisted.  He pulled harder. With each renewed grasp, more of a thick, damp brown mass surfaced. Finally Ubaldo staggered backward. A twenty-foot-long root (radice) lay at his feet.

“L’eroe dei tubi!”  (“The hero of the pipes”), he said with a grin and hauled the serpentine root away.

Non vale un tubo — It’s not worth a pipe (anything)