Nomi (Names) and Nonni (Grandparents) in the Italian language 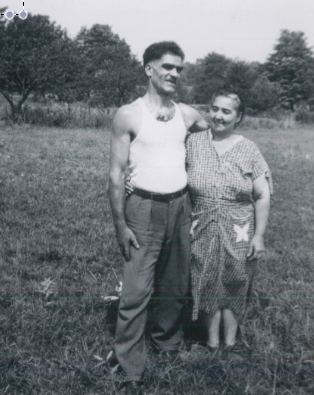 My wife and I chose our son’s name, Luca, from a book of Italian names. It was very much unlike the American names our first-generation parents had given our siblings and us: James, Anne, Mark, Jane. I thought my grandparents (above), immigrant peasants who came to America in 1929, would be thrilled. I was wrong.

“Sí," I replied, beaming. She looked at me as if we’d named him Benito (Mussolini).

“It’s an Italian name,” I said in defense. She snapped her wrist, as if to flick the name from the apartment.

“Mi piace George!” (I like George.) my grandfather hollered from a couch, where he'd gone for a siesta after lunch.

“Un bel nome” (A beautiful name), said Desolina. Were they kidding? These old folks came from families who gave their children beautiful, exotic names like Bartolomeo, Dirce and Scholastica.

“Allora, si chiama Luca”  (His name is Luca), I said with finality. Desolina shook her head, as if there was plenty of time to change the birth certificate.

"Luca è un nome stupido," she said. Now I was angry. I asked her, peevishly, “What would you name him?” She took a pen and napkin, wrote and passed it to me. It said “ENdEI.”

I read it several times. I couldn’t figure out what she’d written. Like many girls, Desolina was pulled from school after third grade. Not only couldn't she spell, but she wrote with a mix of capital- and lower-case letters that reminded me of ransom notes cut from magazines.

“Sí, Endei,” my grandfather, Tony, said. He looked at us sideways, his head on a pillow. “Very good name.”

“Endee?” I asked. “Non capisco.” (I don't understand.)  Desolina grabbed the napkin and underlined the word a few times, as if that would help, and passed it back.

“ENdEI!” she cried. In disgust, she tossed the pen at a plastic banana in the fruit bowl. I shrugged. Then my grandfather spoke with an inflection that helped me understand: “AN-Dei.”

“All right, then, George,” Desolina said. I shook my head.

“Luca is the boy’s name. Finito.” I left the kitchen table to cool off.   I might have known the name would be a problem. Luca's older sister's name is Alma. Tony and Desolina never got this straight. They kept calling her “Elma,” which is my mother’s name. They couldn’t comprehend how we could’ve chosen a name so close to “Elma” without naming Alma “Elma.”

As for Luca, though Desolina adored him, she never took to his name. Either she refused to accept it or, at the age of 91, with her shaky memory, kept forgetting it. Until the day she died she referred to him as “Il Boy.”

James Vescovi’s new book is called Eat Now; Talk Later: 52 True Tales of Family, Feasting and the American Experience. Some of the stories, which are about his eccentric grandparents, appeared singly in The New York Times, Alimentum Journal: The Literature of Food, Creative Nonfiction, Newsday, Gazetta Italiana  and various anthologies. To read more excerpts and view photos and recipes, click here.